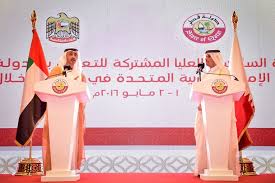 The sixth session of the UAE-Qatar joint higher ministerial committee ended on Tuesday with the signing of series of agreements and memorandums of understanding as both sides reaffirm their commitment to strengthen their bilateral ties and coordinate their actions on international issues.

The two-day session was co-chaired by the foreign ministers of the two countries, Sheikh Abdullah of the UAE and Sheikh Mohammed of Qatar.

At a joint press conference held at the end of the session, Sheikh Abdullah said they “need to work together” to take their “bilateral ties into a future that is more solid and deeper.”

He said the two countries are cooperating at the level of the Gulf Cooperation Council and the Arab League to address regional issues, which “can’t be isolated from the overall challenges we are currently facing.”

His Qatari counterpart said the difficult juncture in the Middle East requires that the two States redouble efforts to strengthen their cooperation and remove any obstacles.

According to Sheikh Abdullah, there are 1074 UAE companies operating in Qatar while the number of Qatari companies in the UAE stands at 4200. The trade balance between the two countries is between $6 and $7 billion.

The session focused on cooperation in the sectors of renewable energy, culture, exhibitions, tourism and youth in addition to developing small and medium enterprises.