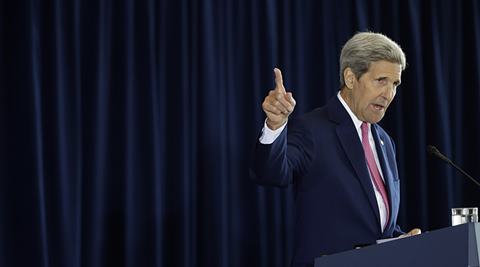 US Secretary of State John Kerry said “the target date for the transition is 1st of August” in Syria or else the Assad government and its allies “are asking for a very different track.” Hoping that “something happens in these next few months,” he said the political transition would not include President Assad because “as long as Assad is there, the opposition is not going to stop fighting.”

Kerry stressed that “Assad cannot reunite the country” as if his “strategy is to somehow think he’s going to just carve out Aleppo and carve out a section of the country” would end the war. He warned that failing to adhere to the deadline would lead to clear “repercussions” such as “the total destruction of the cease-fire” among others.

Kerry made those remarks after meeting with the UN special envoy for Syria Staffan de Mistura and Russia’s foreign minister Sergei Lavrov. They agreed to establish a monitoring ceasefire center in Geneva, Switzerland, and De Mistura hopes that it would be effective in containing the violence of the warring parties.

Lavrov described the permanent monitoring center as “a major step forward towards a more intensive coordination of the efforts by Russia and the US.”

John Kerry’s warning might be short-lived considering that he has only a few months in office ahead of the crucial presidential elections which also makes it unlikely for the Obama administration to deploy troops for active and frontline combat in Syria.

As the situation continues to be chaotic, a new umbrella group that emerged in March and called Syria’s Tomorrow said the Geneva talks should be centered on “the implementation of the Geneva Declaration and the achievement of a transition to democracy and the transfer of control to the transitional governing body.” The group is a coalition of liberal opposition factions and headed by Ahmad Jarba, the former chief of the National Coalition for Syrian Revolutionary and Opposition Forces, better known as the Syrian National Coalition (SNC).