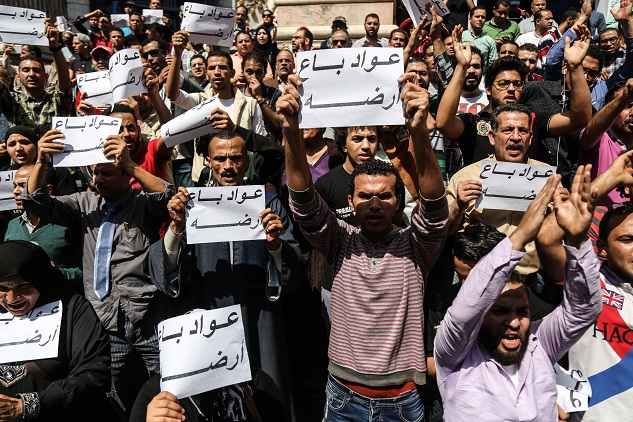 Egyptians were out on the streets on Monday for different reasons. Celebrations organized by the Future of Homeland Party celebrated the 34th anniversary of the handing over of the Sinai Peninsula by Israel in 1982 under the 1979 Camp David peace agreement while on the other hand, there were protests under the banner of “Egypt Not For Sale” as President Sisi is accused of selling the Red Sea islands of Tiran and Sanafir to Riyadh for economic and financial aid and investment.

Protesters changed their venue from downtown Cairo to Dokki because security forces had blocked access to the area. Several hundred people attended the protest and there were low turnouts in Alexandria and Damanhour in northern Cairo.

Security forces dispersed the protesters and more than 100 people have been arrested in Cairo and held in custody in other provinces according to lawyer Ragia Omran of the Front to Defend Egypt’s Protesters.

Maasoum Marzouk, an official of the Arab nationalist Karama Party said some of those who were fleeing the protest sheltered together with other party officials at its headquarters in Dokki. He described the scene as “a city under occupation now” by security forces.

The crackdown on the protesters was also used to target journalists and the Egyptian Journalists’ Syndicate said 12 were arrested and 3 attacked while covering the protests. It claimed that pro-Sisi supporters together with men in police uniform had attempted to storm its downtown headquarters, one of the planned rallying points for the protests.

Meanwhile, at the 34th anniversary celebration of the handing over of the Sinai Peninsula in downtown Cairo’s Abdeen Square, patriotic songs honoring the Egyptian Armed Forces were chanted. Posters and banners expressing support for Sisi were held up while fighter jets paraded in the sky.

There is increasing opposition against President Sisi’s policies and critics say he is using the security forces to quell any public protest against his government. Human rights groups have often accused his administration of ruling with an iron fist.