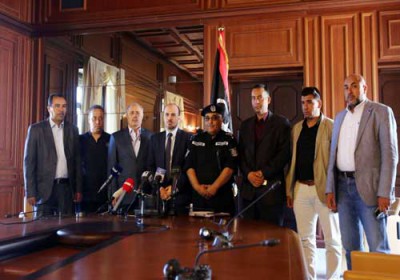 Seven ministries in Tripoli including the foreign affairs ministry were handed over to the UN-backed Government of National Accord (GNA) on Monday and Mohammed al-Ammari, a member of the Presidential Council formed under the Libya Political Agreement (LPA), said the planning, labor and education ministries will follow in the next few days.

He said the transfer of power to the GNA is “going well” and “as soon as the ministers take the oath of office, they can begin working from these ministries.”

Since its arrival in Tripoli last month onboard a ship, the GNA has been handed several ministries but it has however not started work as cabinet members continue to camp at the heavily fortified Bu Setta naval base in Tripoli which serves as its headquarters. The foreign affairs ministry is close to the base and was already effectively in the hands of Mohamed Siala appointed as the foreign minister of the GNA.

Under the LPA reached in Morocco in December, the UN-backed government’s legitimacy depends on its approval by the Tobruk-based House of Representatives (HoR) through a vote of confidence. Numerous attempts to hold a voting session was blocked due to diverging issues between the lawmakers on whether the approval of the constitutional draft or the GNA should be held first.

However, it seems like the Tobruk-based government led by Prime Minister Thinni and once referred to as the internationally recognized government before the formation of the GNA does not have plans to cede power as reports emerge that it has loaded its first oil shipment for sale despite warnings from the National Oil Corporation (NOC); the sole body authorized to oversee Libya’s oil transactions.

The sale will provide the Tobruk-based government with the much needed revenue to continue its activities amid the growing international isolation and even reinforce its defiance against the GNA.