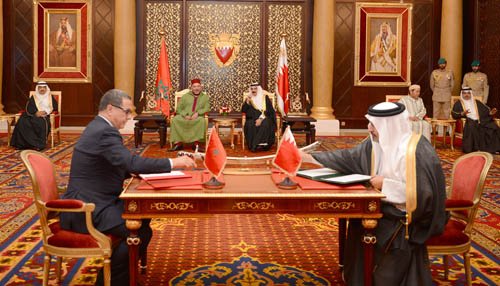 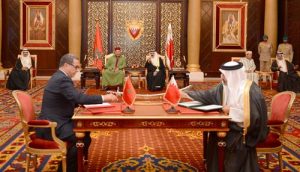 King Mohammed VI of Morocco held talks Monday with King Hamad bin Isa Al Khalifa of Bahrain shortly after arriving in the Gulf country on a brotherly and working visit.

King Hamad said the Moroccan sovereign’s visit to Bahrain reflects the solid relations binding the two countries and embodies firm keenness on continuing consultation and cooperation for the sake of shared interests.

During the talks, King Hamad reiterated Bahrain’s support to Morocco’s territorial integrity and rejection of all encroachment on any inch of its territories, and renewed firm backing to Moroccan efforts to settle the dispute over Western Sahara, said BNA.

King Hamad also commended the dedicated efforts made by the Moroccan leader, as chairman of the OIC Al-Quds Committee, in support of the Palestinian people’s inalienable rights.

The two sides hailed the positive results of the first Morocco-GCC Summit, which was held in Riyadh last week and which reaffirmed the strong relations and strategic partnership between Morocco and the member states of the Gulf Cooperation Council; namely Bahrain, Kuwait, Oman, Qatar, Saudi Arabia and the United Arab Emirates.

The Riyadh Summit had actually issued a joint statement underlining that this summit “is but a reflection of the special and exceptional relations, binding GCC member states and Morocco,” and stressing the keenness of the GCC member states’ leaders to enhance their relations with Morocco, to the highest levels, in political, economic, military and security-related sectors.

The GCC leaders also renewed their unfailing support to Morocco in the Sahara issue and to the autonomy initiative it presented as the basis for any solution to this artificial regional dispute. They expressed their total ejection “of any act that may affect Moroccan supreme interests, on top of which the Moroccan Sahara issue,” the joint statement said.

King Mohammed VI and King Hamad, who had both attended the Riyadh Summit along the other leaders of the Arab Gulf countries, also stressed at their talks the need to pool all efforts, Arab and international, to combat the scourge of terrorism which is destabilizing countries and threatening international security and stability, BNA stated.

The two leaders afterwards presided over the signing ceremony of two protocols and an executive cooperation program.

The first protocol amends the agreement on non-double taxation and fight against tax evasion signed in 2000.
The second text concerns the implementation program of the endowments and Islamic affairs cooperation agreement for the years 2016, 2017 and 2018, while the third provides for enhanced cooperation between the Moroccan Institut Supérieur de la Magistrature and Bahrain’s Institute for Judicial and Legal Studies.

The Moroccan Sovereign’s visit to Bahrain is part of a tour he is undertaking in a number of Gulf States in the wake of the Riyadh summit.

King Mohammed VI is expected this Tuesday in Qatar for talks with Sheikh Tamim bin Hamad Al-Thani on means to bolster bilateral relations and on issues of common interest.