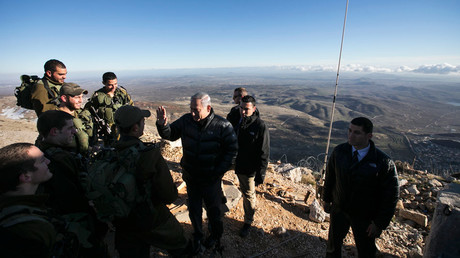 The 15 members of the UN Security Council, chaired this month by China, have voiced their concerns indicating that the Israeli move violates international law.

“Council members expressed their deep concern over recent Israeli statements about the Golan, and stressed that the status of the Golan remains unchanged,” China’s UN Ambassador Liu Jieyi told reporters at end of a closed-door meeting.

Ambassador Liu Jieyi added that the council resolution 497 of 1981 numbed Israel’s then decision to annex the Golan Heights.

Israel’s UN ambassador, Danny Danon hit back in a statement accusing UNSC members of being manipulated by some members to criticise Israel.

“Holding a meeting on this topic completely ignores the reality in the Middle East,” he said.

“While thousands of people are being massacred in Syria, and millions of citizens have become refugees, the Security Council has chosen to focus on Israel, the only true democracy in the Middle East.”

“It’s unfortunate that interested parties are attempting to use the council for unfair criticism of Israel,” he added.

Prime Minister Benjamin Netanyahu had earlier this month said at a cabinet meeting on the Golan Heights that Israel will never surrender the territory to Syria and was keeping it for good.

Brussels and Washington chided Tel Aviv for the decision.

Israel occupied the Syrian territory in 1967 following the six-day war with Egypt, Syria and Jordan. It unilaterally annexed it in 1981. The annexation stirred international condemnations calling Israel to pull out.

Around 30 Jewish settlements housing 23,000 have been built in the area.

UN forces known as UNDOF stationed since 1974 on the Heights to monitor cease fire line over the past years have been forced to pull back from a number of positions due to fighting between militants and Syrian government forces reports say.