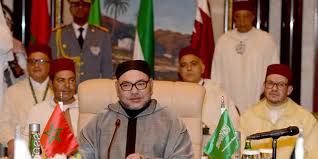 King Mohammed VI has hailed the unwavering backing of GCC countries to Morocco’s territorial integrity currently targeted by some enemies seeking to destabilize the North African nation which has weathered Arab Spring storms.

“The question of the Moroccan Sahara has always been the cause of Gulf countries as well. And this is hardly surprising”, said the Sovereign in a speech made Wednesday in Riyadh at the 1st Morocco-GCC Summit.

In 1975, delegations from Saudi Arabia, Kuwait, Qatar, Oman and the United Arab Emirates took part in the Green March, said the Sovereign, recalling that Sheikh Mohammed bin Zayed Al-Nahyan, Crown Prince of Abu Dhabi, was among participants at the Green March while he was only 14 years old at the time.

Since then, the Gulf States have spared no effort to uphold Morocco’s just cause and defend the kingdom’s sovereignty over its entire territory, added the Monarch, noting that this position was reaffirmed during the recent crisis with the UN Secretary-General.

“Only this time, the situation is serious. It is also unprecedented in the history of this artificial dispute over the Moroccan Sahara”, stressed the Sovereign.

“What we are witnessing, in fact, is a proxy war, in which the Secretary-General of the United Nations is being used to infringe on Morocco’s legitimate, historical rights in its Sahara, through biased statements and unacceptable behavior regarding the Moroccan Sahara”, added King Mohammed VI.

“This should not come as a surprise, for there is something that might explain it all! Indeed, what can one expect from the Secretary-General when he himself admits that he is not fully informed on the Moroccan Sahara issue – nor is he on many others? He is unaware of this issue’s intricate developments and its real background”, said the Sovereign, wondering: What can the Secretary-General do while he is a hostage in the hands of some of his aides and advisers who have personal agendas. They are politically motivated and they serve other parties’ interests violating their UN mission which requires respect of neutrality and objectivity.

The UN SG is supposed to be a peace-maker and observe neutrality in any conflict. But Ban Ki-Moon, whose second & last term expires December 2016, has betrayed his neutrality when he made inappropriate and offensive comments for Moroccans on Sahara during his latest visit to the region early March.

After the blatant bias he showed through his reckless remarks, Morocco decided to suspend its $3 million voluntary contribution to the MINURSO, and to reduce drastically the mission’s civilian staffers.

Many influential members of the Security Council expressed support to Morocco in its row with Ban Ki-moon.

“Morocco has a problem with the Secretary-General, and more particularly with some of his aides, because of their hostile positions towards my country.”
As regards this artificial dispute over our territorial integrity, Morocco has always liaised with its traditional friends that include the United States, France and Spain, and with Arab sister nations, especially the Gulf States, as well as with African countries, such as Senegal, Guinea, Cote d’Ivoire and Gabon, said the Moroccan King.
King Salman of Saudi Arabia who delivered the opening address at the summit, reaffirmed, on behalf of all the member States of the Gulf Cooperation Council, their total rejection of any act that may affect Morocco’s supreme interests on top of which the Moroccan Sahara issue.