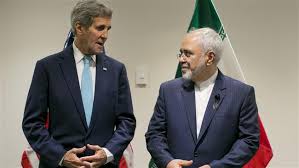 US Secretary of State John Kerry and Iranian Foreign minister Mohammed Javad Zarif met at the UN headquarters Tuesday to discuss the implementation of the July 2015 nuclear deal reached between the so-called P5+1 and Iran.

Kerry told reporters that another meeting will be held “to sort of solidify” what was discussed while Zarif stated that the discussions were meant to “draw the benefits Iran is entitled to from the implementation of the agreement.”

They will meet again on Friday in the same city and Kerry gave assurances that they have agreed to ensure that the agreement “is implemented in exactly the way that it is meant to be and that all the parties to that agreement get the benefits that they are supposed to get out of the agreement.”

The agreement led to the lifting of sanctions on Iran at the beginning of the year but Tehran continues to be concerned about the limitations in the global financial transactions due to US financial restrictions that are hampering foreign investments in the country.

Current US policies stop foreign banks from clearing dollar-based transactions with Iran through US banks and the banks that violated the policy faced billions of dollars in fines.

At the end of last month, Iran’s supreme leader Ayatollah Ali Khamenei lamented about the restrictions and the Governor of the Central Bank, Valiollah Seif, said last week that Iran has gotten “almost nothing” from the agreement because it has been unable to access as much as $100billion of its assets abroad.

According to Kerry, Iran received about $3billion of its frozen assets.

Ahead of the Friday meeting, Kerry said he “worked on a number of key things” with Zarif and “made some progress on it.”