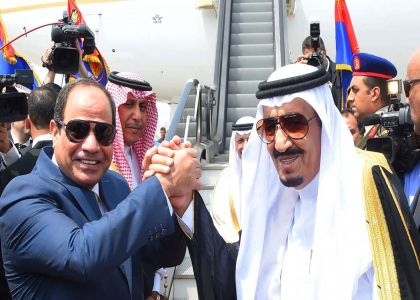 Egyptian officials on top of whom President al-Sisi allegedly received bribes from Saudi Arabia during King Salman‘s five-day visit to endorse agreements among which handover of the two Islands to Saudi Arabia, according to Saudi official documents leaked by former Egyptian presidential candidate Ayman Nour. The leaked documents, seemingly official correspondence sent from the Saudi embassy in Cairo to the head of the royal court and the country’s foreign minister, were published on Nour’s Twitter feed on Wednesday.

King Salman visited Egypt last week for the first time since coming to power in 2015. The visit was marked by the signing of an array of agreements worth billions of dollars including maritime border agreements capped by the Egyptian cabinet’s announcement to relinquish territorial sovereignty over Tiran and Sanfir Islands in the Red Sea to Saudi Arabia as well as the agreement for the construction of a bridge to link the two countries.

The leaked documents mention the positions of some Egyptian officials, including the President, the Parliament Speaker, MPs, and the gifts they should receive during the visit of the Saudi monarch. The documents also disclose the price of the gifts, which include pricey watches, as well as cash gifts to be given to cabinet ministers, journalists and “all employees in the Egyptian presidency.”

According to the documents, the President should receive a Rolex Submariner Diamond Emerald Baguette watch, worth $290,000 – $300,000.

Nour, who appeared on opposition satellite channel Elsharq on Wednesday evening, told the program host “he intended to use the documents to file a criminal complaint against the Egyptian government for receiving foreign bribes.”

Nour argued that “there were laws regulating the exchange of valuable gifts between world leaders, but the fact that the Saudi document suggests gifts for all members of parliament – and select members of the media -demonstrates an intention to buy influence among lawmakers.”

Nour’s claims that the documents were official were rejected. Badr al-Amer, a Saudi Twitter, said the documents contained phrases unlikely to be used in official government correspondence in Saudi Arabia.

Al-Amer also claimed that the documents contain grammatical errors, while official documents are routinely edited for spelling and grammar.

The news that the Egyptian cabinet gave up sovereignty over the two islands caused a tide of public anger in Egypt with thousands of Egyptians lashing out at President al-Sisi for selling off the country to Saudi Arabia.

“We did not surrender our rights, but we restored the rights of others,” Sisi said in comments broadcast live.

“Egypt did not relinquish even a grain of sand,” he added.

“All the data and documents say nothing except that this particular right is theirs. Please let us not talk about this subject again,” he added. “There is a parliament that you elected which will debate the accord. It will either ratify or reject it.”