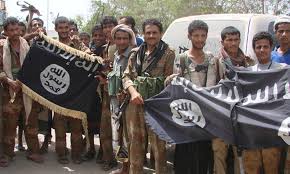 Al-Qaeda in the Arabian Peninsula (AQAP) is on the verge of becoming a major force in Yemen with the possibility of expanding its area of control following reports that the extremist group is controlling the southeastern port city of Mukalla with a population of around 500,000 habitants.

AQAP strengthened its hold on the city after most Yemeni security agents joined the battle against the Houthis.

The group depends on the lucrative illegal oil trade and charges on port transactions to fund its operations.

Government officials and local traders estimated that the group earned around $100million from looting the central bank’s branch in the city and millions more from extorting the national oil company. The taxation of goods and fuel passing through the port earns it around $2 million per day.

The financial power is expected to revitalize the capabilities of AQAP. A US counter-terrorism official stated that the group is the “most potent affiliate” of al-Qaeda and its “bomb-making expertise and long standing ambitions to carry out attacks using novel or complex tactics underscore threat.”

AQAP controls a coastline of around 600km and a senior Yemeni government official said the ongoing war “provided a suitable environment for the …expansion of al Qaeda” and it had acquired “very large quantities of sophisticated and advanced weapons” from military bases in the south making it stronger and dangerous.

Request by AQAP for the Hadi government to provide it with documents to sell crude oil was turned down with government officials claiming it will be equivalent to a de facto legitimacy. AQAP proposed that the government would keep 75% of the profit.