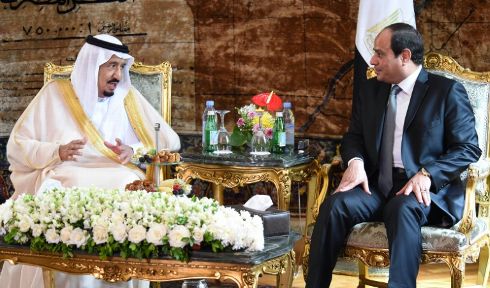 The Saudi monarch arrived in Cairo Thursday in his first visit to Egypt since ascending to the throne, a special visit said to announce several billion-dollar agreements to shore up and revive Egypt’s unraveled economy.

King Salman’s visit has been highly expected in Cairo as analysts say it will unveil numerous billion-dollar deals among which $1.5 billion package earmarked for development projects in the Sinai, agreements on the maritime borders between the two countries and on their electricity grids connection.

Cairo also expects the king to oversee the signing of a $20 billion deal to finance Egypt’s petroleum needs over the next five years, “The New Arab” Qatari media reports.

The King’s accompanying businessmen will also announce a $4 billion investment in other projects including the Suez Canal, energy and agriculture. Ten per cent of that amount has been reportedly deposited in Egyptian banks.

King Salman’s talks with Egyptian officials will also touch on regional issues including Saudi Arabia’s lead in regional warfare in Yemen, Syria and its regional hegemony competition with Iran. Cairo has been reluctant to fully embark on the Saudi-led international campaign in the region even though it has lent support to the Saudi-led coalition against Houthi rebels in Yemen.

Saudi Arabia and Egypt are fighting Muslim Brotherhood that both see as threat to their internal security.

The five-day visit, taking place as Saudi Arabia is asserting itself as leader in the Arab and Islamic world, blows up reports that al-Sisi has lost Riyadh’s favor.

King Salman is expected to address the Egyptian parliament on Sunday.