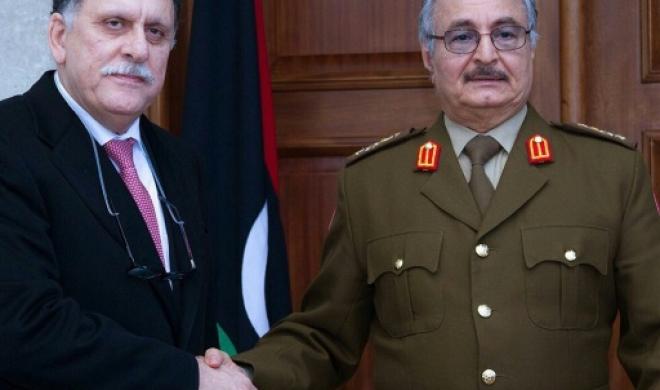 Khalifa Haftar, head of the Libyan army under the Tobruk-based government, spoke about the ongoing political crisis since the arrival in Tripoli of the UN-backed Government of National Accord (GNA) by clarifying that the military has no interest in forming a military council to oversee the affairs of the country.

Yet, he renewed his support to the House of Representatives (HoR) and underlined that he will only “support” a unity government “endorsed” by the parliament while warning that “we will not stand idle if the political process leads the country into abyss.”

The HoR made its eighth attempt, on Monday, to hold a vote of confidence on the GNA but it failed to reach a quorum.

Haftar lambasted those who accept the division of the country saying they have “sold their honor and conscious.” He vowed that “Libya will remain united and unified” and “honorable Libyan people and the army will defend the unity of our nation.”

The political crisis in the country reached a new level since the arrival of the GNA in Tripoli last week.

In the latest development, members of the National Forces Alliance decided to set up a State Council to be based probably in Benghazi. It’s different from the one that was established during the Radisson Blu Hotel meeting of some lawmakers from the General National Congress (GNC) this week. The National Forces Alliance walked out of the GNC in 2014 following the election of the Tobruk parliament. The party would soon hold a consultative meeting with its political allies.

Meanwhile, Prime Minister Khalifa Ghweil’s website is believed to be taken over by the GNA while Prime Minister Thinni’s Facebook page is also inaccessible hinting that a communication battle could just be beginning.