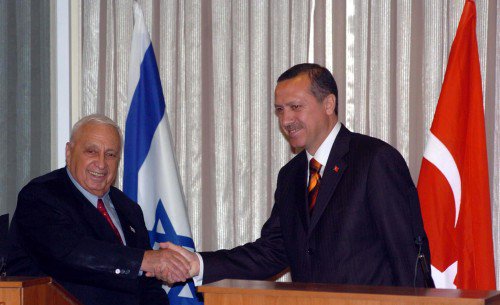 Ties between Ankara and Tel Aviv are seemingly warming up as the Turkish foreign ministry underlined in a statement that “progress” was made in the latest round of talks held in London and that an agreement could be materialized “very soon.”

Turkey used to be Israel’s closest ally in the Middle East but relations became sour in May 2010 when Israeli commandos stormed the Mavi Marmara flotilla that was carrying humanitarian aid to Gaza in defiance to the blockade imposed on the Strip. The incident resulted in the death of nine people, an American and eight Turkish citizens.

Relations have been improving since last year after Israel apologized for the flotilla incident but Turkey has stressed that normalization with the Jewish State will not go ahead without the compensation of the Turkish victims and lifting of the blockade on Gaza. That condition has been a major challenge but has not stopped the two governments from holding several meetings to revive ties lately.

The Turkish foreign ministry statement stated that the two sides are “closing the gaps” and have “agreed that the deal will be finalized in the next meeting which will be convened very soon” without dwelling on the context or content of the agreement.

President Erdogan used to be a fierce critic of Israel but he recently seemed to be softening his position after he received during his recent visit to Washington representatives of Jewish organizations in the US.