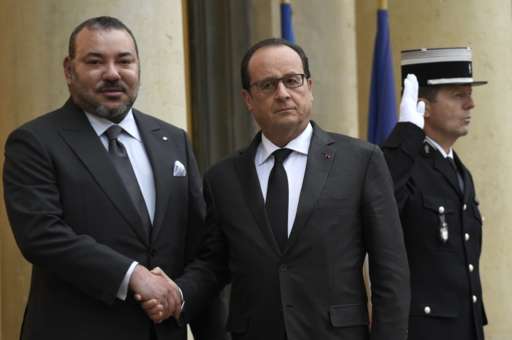 King Mohammed VI and French president François Hollande have called on the Libyan House of Representatives “to quickly approve” the new line-up for unity government to restore peace to Libya where the prevailing violence is threatening the stability of the whole region.

During their meeting held Wednesday at the Elysee Palace in Paris, the two Heads of State reviewed latest developments of the Libyan conflict, which “poses great challenges to security in the Maghreb and Eastern Mediterranean regions”, says a press release issued by the King’s Office.

On this occasion, president Hollande commended the key role played by Morocco in the peace process held under the UN auspices. This laborious process was crowned by the peace deal sealed in the Moroccan city of Skhirat, spelling out a new national unity government in Libya backed by the United Nations.

The first 32-member cabinet list was rejected by the MPs of the internationally recognized Parliament, based in Tobruk, saying it includes too many ministers.

The Tobruk lawmakers also snubbed the first government unity list because the UN refused to exclude amendments added by the Islamist authorities.

The amendments that irked the Tobruk lawmakers would give the unity government the power to fire all senior Libyan officials not unanimously approved by its members.

A new revised list for a unity government has been worked out in a bid to end violence and bloodshed between armed rival warring factions.

The new proposed cabinet list, which includes 13 ministers and five ministers of state, has been sent to Libya’s eastern parliament for approval.

The French President thanked the Moroccan Sovereign for his personal commitment and sustained efforts that contributed to the success of the UN conference on climate change (COP21) held lately in Paris.

The two Heads of State also agreed to work out a joint road map to enhance coordination, ensure ratification by all member States of the Paris agreement and guarantee the success of the 22nd UN conference on climate change (COP22) to be held in Marrakech 7-18 Nov.2016

The two leaders also praised the Moroccan-French close cooperation in economic and cultural fields as well as in the war against terrorism, transnational crime and extremism.