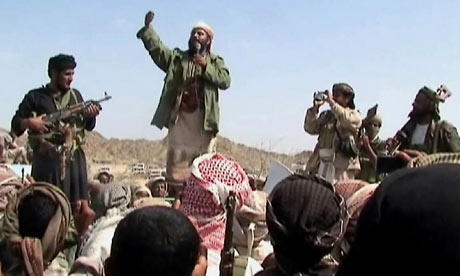 A group affiliated to al-Qaeda in the Arabian Peninsula (AQAP) took over the town of Azzan from southern separatists and is trying to impose its authority, setting up checkpoints at the town’s entrances.

A source said the city council was also stormed by the militants. The gradual empowerment of al-Qaeda in the Yemeni war could lead to the coalition forces, with the support of pro-Hadi militants, opening a new front against the extremist group as it increases territorial gains in the country.

On Sunday, reports said Commander Sheikh Samhan Abdul Aziz Al-Rawi of the Popular Resistance has been assassinated and his body was found in the Mansoura neighborhood of Aden. The pro-Hadi government is using Aden as its base despite persisting security challenges even after the city was proclaimed liberated several months ago.

Al-Rawi could have been kidnapped in the area before being killed, but no group claimed responsibility for his assassination. Al-Rawi, who was one of the leaders of the Popular Resistance in Aden, was reportedly fighting with the resistance during recent clashes with Houthi militias two weeks ago.

Before the deployment of ground troops by the Saudi-led coalition, the Popular Resistance was on the ground battling the Houthi Movement. The coalition has recently been subjected to harsh criticism for hurting civilians. Coalition spokesman Brigadier General Ahmed Asseri announced a “high-level independent committee” has been set up to investigate airstrikes collateral damage.

The announcement came following outcry from Human Rights activists and after a yet to be released UN panel report highlighted that the coalition actions could be likened to crimes against humanity.