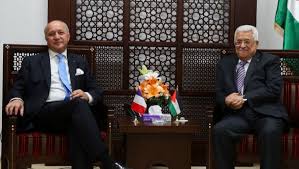 French foreign minister Laurent Fabius said Paris will be organizing an international conference to revive the stalled peace talks between Israel and Palestine while stressing that in case the conference fails, France would recognize the State of Palestine.

Fabius said France is taking its “responsibility as a permanent member of the UN Security Council” in order to “not let the two-state solution unravel.”

He lamented that colonization of Palestinian territories still continues and that the Israeli Prime Minister went as far as accusing the UN Secretary General of encouraging terrorism just because he reminded that colonization was illegal and must stop.

Reacting to the French official’s statement, Israeli Prime Minister Netanyahu told his cabinet that the statement will encourage Palestinians to not reach an agreement during the proposed conference.

Netanyahu said the minister’s statement posed a “threat” to Israel as he claimed that it “will be an incentive for the Palestinians to come and not to compromise.” He said Israel is “prepared to engage in direct negotiations without preconditions and without dictated terms.”

Palestine’s chief negotiator, Saeb Erekat, told Israel’s Army radio that the two parties should “engage seriously with this French initiative” before adding that “we’re under your occupation and you must understand this.”

Palestinian President Mahmoud Abbas on his part had told the African Union summit that Palestinians will not return to negotiations just for the sake of negotiating and will not continue to unilaterally implement previous agreements.

The United States, European and Arab countries would be invited to the international conference that might be held next summer.

A senior US administration official said however that Washington continues to clearly believe that “the path to resolve this conflict is for the parties to reach an agreement on final status issues directly.”