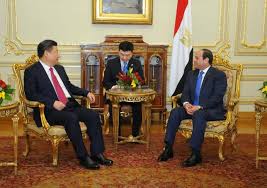 Addressing the Arab League in Cairo, President Xi unveiled a multimillion dollar investment plan in the Middle East, including special loans worth $15billion to promote industrial production, soft loans amounting to $10billion and a similar amount in trade credit for joint energy projects.

He reiterated China’s neutrality and nonintervention policies saying that China is not setting up proxies or building a sphere of influence in the region.

He insisted that “the international community should respect the will and role of those directly involved.”

He however pointed out that Beijing is willing to “enhance cooperation with Arab States on cyber security, block the online transmission of audio and video materials instigating violence and terrorism, and jointly participate in the formulation of an international counterterrorism convention in cyberspace.”

At the bilateral level, China and Egypt signed 21 agreements including a $1billion loan agreement to the North African country’s central bank, a $700million loan to state-owned National Bank of Egypt as well as other investments in development and infrastructure projects.

The two sides also discussed plans to launch around 15 projects in electricity, infrastructure and transport worth around $15billion.

China is expanding its presence in Egypt. 32 companies are working in the Suez Canal Economic Zone and the number is expected to reach 100 when the next phase is completed thereby boosting Chinese investments from more than $400million to $2.5billion.