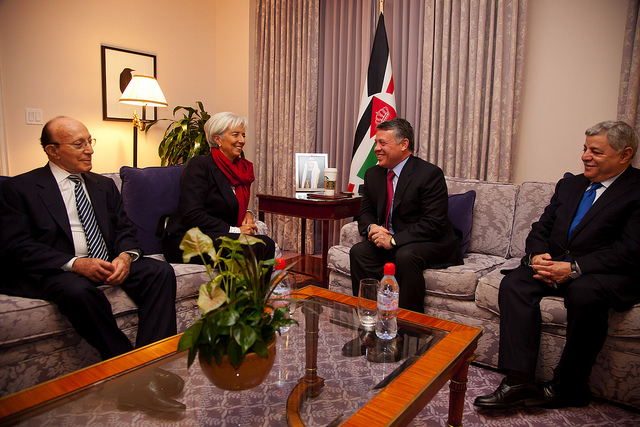 Another round of talks between Jordan and the International Monetary Fund (IMF) ended with hopes that an agreement could be reached by February with head of the IMF mission, Kristina Kostial, saying that it could be approved by the board in April.

Jordan wants to replace its three-year $2 billion standby agreement that ended last August with an Extended Fund Facility but the two parties can’t agree on an amount. The standby agreement contributed to fiscal stability but structural reforms were not forthcoming.

Kostial said IMF is unwilling to give Amman a “high” amount because it has a much lower fiscal deficit now and “in a better position so there is no reason for the amount to be as high.” She added that they will “focus on reducing the growing debt” which is expected to reach more than 90% of the GDP before 2016 compared to 2011’s 71%.

An IMF statement highlighted that economic growth is projected to reach 2.5% this year and could be more than 3% next year while inflation could fall by 0.7% before standing at about 2% in 2016. The country’s “international reserves are at an adequate level” as credit to the private sector continues to improve and “banking sector indicators remained sound.”

The country’s foreign debts reached $30 billion after several borrowings but Kostial said further fiscal adjustments are needed to lower the debts to “safer levels.” She remains optimistic about the Jordanian economy saying “it’s all about more growth…creating more jobs.”

Amman started experiencing financial constraints after a massive spending during the Arab Spring protests to satisfy demands. “Specific reform elements” will be discussed in the next meeting to be held at the beginning of the year.