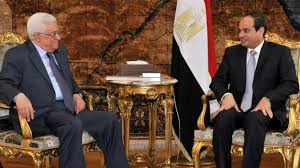 President Sisi of Egypt met Palestinian leader Mahmoud Abbas in Cairo to discuss the situation in Palestinian territories and Egypt’s actions along the border which has restricted crossing and smugglings to Gaza. After their meeting, a statement read by Sisi’s spokesperson Alaa Yousef outlined that Cairo’s policies along the border will change when the Palestinian Authority (PA) takes control of the Gaza Strip currently controlled by Hamas.

The statement stressed that Egypt’s actions are geared towards securing the borders as it continues to fight against extremism and they “could never be meant to harm the Palestinian brothers in the Gaza Strip.” It added that the activities are being done in full coordination with the PA although those living in Gaza have criticized Cairo for making their livelihood harder as they struggle to survive under the Israeli blockade imposed since 2007.

Clashes with extremist groups in the Sinai forced Cairo to rarely open the Rafah crossing point to Gaza and to destroy the tunnels along the border after declaring the area a military buffer zone.

Sisi assured Abbas that activities would operate “normally” when the PA replaces Hamas in Gaza. Hamas had been closer to Morsi’s government than Sisi’s which believes that it supports the militancy in the Sinai Peninsula.

Hamas is also struggling to contain Islamist groups in Gaza that are determined to begin a war with Israel.

With regards to the ongoing clashes between Israeli forces and Palestinians, the two leaders called for an end to all activities that create more tension including settlement constructions in order to pave a way for the resumption of talks.