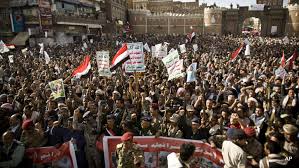 Fighting between pro-Hadi militants and the Houthi Movement has intensified in Yemen’s cultural capital, Taez, and the International Committee of the Red Cross (ICRC) warned that the situation might get worse because basic utilities have been destroyed.

The rival groups are fighting over the control of a strategic road in the important Al Wazeya district because it will facilitate the movement of troops for the dominant group.

According to Moa’ath Al Yaseri, a senior figure in the popular resistance militia fighting in Taez province, the Houthis started bombarding the city on Wednesday killing “more than 80” civilians. They fired indiscriminately on civilian homes in order “to plant fear in the hearts of the civilians,” he said adding that the pro-Hadi troops were able to repel the attack.

UAE state news agency, WAM, stated that President Hadi spoke in a telephone conversation with resistance and military leaders in Taez to offer his encouragement and support in such an important battle. The city has been badly destroyed.

Following the fierce clashes, the head of the ICRC delegation in Yemen, Antoine Grand, released a statement warning that “the situation in Taez is particularly dire” because almost 50% of the hospitals are closed and wounded people are “desperate for treatment.” The Red Cross is also running out of medicines, food, water and fuel.

Meanwhile, the Saudi-led coalition has been boosted with the arrival of 1000 Sudanese troops last week and they are likely to be engaged in ground combat.