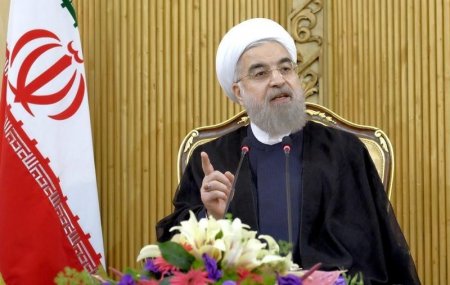 A day after Iran’s Supreme leader Ayatollah Khamenei posted on his website a letter on the nuclear agreement, President Rouhani hailed Khamenei’s stance as a “conditional approval.”

He described Khamenei’s letter as a “stamp of approval” that will help authorities to “start a new chapter toward excellence.”

In the letter posted on Wednesday, Khamenei warned that the agreement has some “ambiguities” which necessitate strict control and monitoring during implementation.

Rouhani gave assurances that the “the supreme National Security Council will closely monitor the other party regarding fulfilling its commitments” and decisions will be made accordingly.

The president hailed Iranian diplomacy that has been able to eliminate “oppressive” international sanctions as well as make the country the first non-permanent U.N Security Council member to get its nuclear enrichment program directly accepted “for the first time in the history of the United Nations.” Rouhani said the negotiations which were held in a “win-win approach… have become a model of resolving peacefully complex world problems” and the results have propelled Iran to “a primary provider of stability and security in the region.”

He also wants an end to the International Atomic Energy Agency’s interest in all present and past military dimensions (PMD) of the controversial nuclear program while underlining that the exportation of refined uranium stockpile should not exceed 90% until the issue is solved and the Arak reactor reconfigured.

The International Atomic Energy Agency, which finished taking samples from Iran’s Parchin military complex in early October, is expected to announce its conclusions on PMD by December 15.