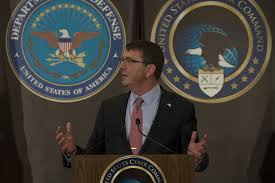 A successful military raid on an ISIS compound in Iraq by the Iraqi Kurdish rebels with the help of the U.S forces has incited U.S Secretary of Defense Ashton Carter not to rule out future similar missions since it allows “you to learn a great deal because you collect the documentation, you collect various electronic equipment and so forth.” The operation helped to free 70 hostages held by the extremist group.

The operation described as a “life-saving” mission also led to the collection of “valuable intelligence mission.” U.S helicopters transported the Kurdish rebels to the site but had to intervene and one of their soldiers was killed. It was the first direct intervention of American troops since the war with ISIS began and Carter stressed that Washington still continues to maintain it is ‘no boot on the ground’ policy and will continue on its “mission to provide advice and assistance” to the Iraqi and Kurdish forces in their fight against ISIS.

“I expect to do more of these operations,” Carter said because “when opportunities arise to carry out operations that will make progress in the campaign” on the Islamic state organization, “we are seizing it.” Carter was speaking on Friday at the pentagon; a day after the raid he described as “a major U.S power.” The U.S has around 3500 military men in Iraq.

Observers believe that the possible inclusion of ground operation by the U.S could be due to Russia’s increasing actions against ISIS.

Meanwhile, Hakem al-Zamli, chief of the Iraqi parliament’s security and defense committee, hinted that authorization will soon be given to Russia to target Daesh (Arab acronym for ISIS) convoys inside Iraq that are coming from Syria.