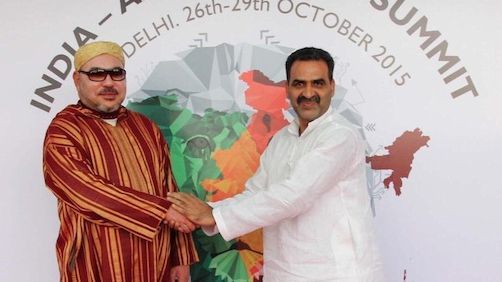 The four-day summit, which opens doors oct.26, is an opportunity for the Moroccan sovereign, who spearheaded several joint development projects in Africa, to give a new impetus to partnership between the giant Asian country and the African continent.

As an advocate of Africa’s interests and aspirations, King Mohammed will meet with African leaders and explore possibilities of building strategic cooperation between Africa and India, sharing many affinities, goals and hopes.

The Moroccan sovereign is certainly the Head of State who travelled most to Africa wherein he launched landmark joint development projects, rekindling hope for African people.

During his African trips, Morocco inked several partnership accords namely with West and Central African countries in the fields of agriculture, fisheries, vocational training, health, water, solar energy, electricity…in a bid to speed up socioeconomic development in these countries.

These projects show clearly Morocco’s commitment for Africa and its focus on African development. Banking on its proximity to Africans and better understanding of African culture, traditions and aspirations, the North African nation has managed to win the trust of African countries for building a model partnership, crafted and engineered by Africans to serve their proper goals.

India can clearly contribute to this Moroccan-led African ambitious project thanks to its know-how and its advanced technologies in the fields of agriculture, industries, medicine, sustained development, solar energy…

Furthermore, both India and Africa share many social and cultural similarities. They both suffered colonialism, cherish common goals and dreams in a globalized world. They both face terrorism threats and development challenges. They both seek to fight poverty, diseases, illiteracy and hunger. They also both endeavour to speed up socio-economic development while preserving cultural legacy and centuries-old civilisations.

During the IAFS summit, a vibrant India and an emerging Africa look forward to building a close partnership, based on the principles of equality, mutual respect and mutual benefit.

The two sides aspire to go beyond strong bilateral relationships to usher in a new paradigm of cooperation which takes into account Africa’s own aspirations for development.

The IAFS summit, which enables consultations at the highest political level between African leaders and the Indian government, provides an opportunity to draw up a road-map for a future “win-win” cooperation, building up on the momentum spurred by Morocco in Africa.

Morocco is the world’s largest exporter of phosphates and India is one of its biggest markets. In 2014, bilateral trade between India and Morocco stood at $1.35 billion, with the balance of trade in favour of the North African nation.