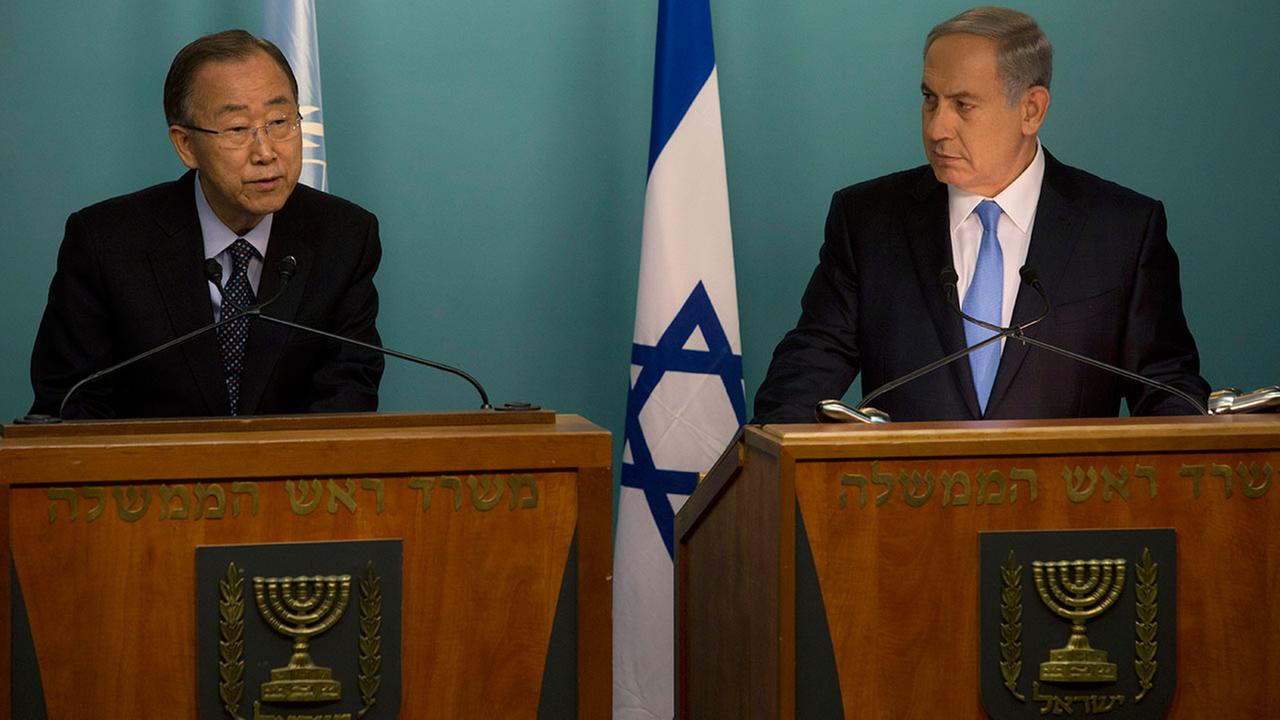 U.N Secretary General Ban Ki-moon was in Jerusalem on Tuesday in an unannounced visit and met with President Reuven Rivlin and Prime Minister Benjamin Netanyahu as tensions continue in the West Bank and Jerusalem.
He said his visit “reflects the sense of global alarm at the dangerous escalation in violence” as he urged the two parties to return to negotiations because “it is not too late to avoid a broader crisis.”
“I am here to encourage and support all efforts to lower tensions and prevent the situation from spinning out of control,” he said at a news conference after meeting the Israeli President on Tuesday.
A series of deadly clashes between Palestinians and Israelis, including Israeli security forces, has marked much of October, with violent incidents reported in more than 50 different locations, including in East Jerusalem, Ramallah, Hebron, Bethlehem, Jenin, Tulkarm and Nablus.
The U.N chief lamented that “beyond the immediate tensions, what is missing is the resolve to restore a political horizon for talks, and a political process that delivers real results and peace.” “Violence only undermines the legitimate Palestinian aspirations for statehood and the longing of Israelis for security.”
Negotiations between Israel and Palestine have stalled for more than a year and both sides blame each other for the new wave of violence.
Ban Ki-moon urged the two sides to shift away from “this dangerous abyss, safeguard the two-state solution and lead people back onto the road towards peace.”
The U.N secretary general stressed that if action is not taken fast, the dynamics on the ground may only get worse, “with serious repercussions in and beyond Israel and Palestine.”
“In my meetings today and tomorrow with the Israeli and Palestinian leadership, I will be appealing to all to take concerted steps to limit new incidents on both sides. Violence only begets violence.”
In less than 2 weeks, 30 Palestinians, including 8 children, and 7 Israelis have been killed in the Occupied Palestinian Territory and over 1300 Palestinians have been wounded, deplored the Worldwide Movement for Human Rights, known by its French acronym FIDH, in a press release last week.
The movement had urged the Israeli government to recognize its responsibility in the uprisings that regularly engulf the Palestinian people and take note of the harmful effects of its policies.
The rioting by the Palestinian youth in bloody clashes with the Israeli army and police in the OPT including Jerusalem are signs of deep frustrations and further illustrate the crisis that the Palestinian civil society is living through, the FIDH had said. After his meeting with the Prime Minister, Benjamin Netanyahu, Ban Ki-moon, urged again Israel to guard against violent incidents, and to conduct thorough investigations when necessary.
He conceded that tightening security measures is sometimes necessary, but warned that such measures can be counterproductive “if they are applied without special efforts to defuse situations before people lose their lives.”