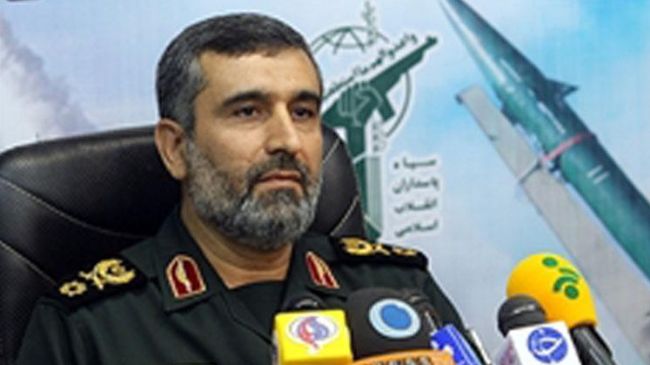 The release of the video is believed to help ease the parliament’s fears that the nuclear agreement has weakened the Iranian military.

According to Hajizadeh, the underground tunnel featured in the footage is “a sample of our massive missile bases” of long range missiles “under the high mountains in all the country’s provinces and cities.”

The senior general boasted that “those who pin hope on options on the table, should only have a look at the Islamic republic’s army options under the table” before adding that “if enemies make a mistake, missile bases will erupt like a volcano from the depth of earth.”

The tunnels are believed to be 500metres underground and underneath mountains but the missiles could be launched within minutes at the orders of Ayatollah Ali Khamenei who is the supreme commander-in-chief.

The tunnels also seem to be hundreds of meters long and around 10 meters high.

Ali Hajizadeh also told state media that Iran is working to replace its current stockpile with newer weapons and that as of next year, the current products will be replaced by a new and advanced generation of long-range missiles.

He added that various range missiles are ready to be launched from all Iranian bases.

Iran’s actions in the past few days could be seen as a provocation addressed to its neighboring countries, especially the Gulf States.

The release of the footage comes just days after state media reported that Iran had test-fired a ballistic missile, a move the U.S., France and other powers described as a “worrying message” and as a “violation” of a U.N. Security Council resolution.

The resolution, dating back to 2010 and barring Iran from developing missiles designed to carry nuclear warheads remains valid until the July 14 nuclear deal goes into effect by 2016.