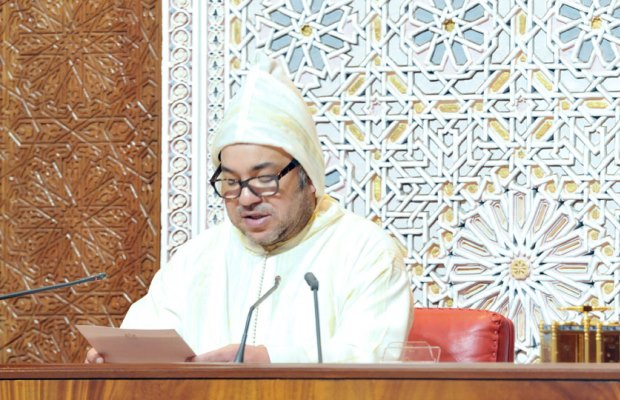 The Moroccan Parliament’s new session that was officially opened on Friday does have a busy schedule as it will have to address many challenges and enact draft laws on highly sensitive and important issues, as outlined by King Mohammed VI in a speech before the parliament two houses.

“Given the mission you have to accomplish during this session, particularly with respect to completing the setting up of institutions, there is no time to waste on marginal disputes,” said the King who pointed out that the draft laws to be tabled before the parliament this session “concern highly sensitive and important issues.”

He went on to say that “many challenges will need to be addressed” during this legislative session and that “serious action and true patriotism will be required to complete the process of setting up national institutions.” These institutions, he said “do not only concern the ruling parties or the opposition, they are there to serve the citizens, irrespective of any other consideration.”

King Mohammed VI, who urged all stakeholders to seek constructive consensus on all major issues that concern the nation, voiced his opposition to “all forms of negative consensus aimed at serving personal objectives or sectarian purposes at the expense of the interests of the nation and the citizens.”

“The nation’s interests should remain above any other consideration,” he insisted, urging MPs to be up to their responsibility and to realize that Moroccans have matured when it comes to elections and hold elected officials to account for their action.

Among the draft organic laws that must be submitted to Parliament for adoption by the end of this legislature at the latest, the King mentioned the organic laws on the adoption of the Amazigh language as an official language, on the National Council for Moroccan Culture and Languages, on the right to strike and on the Council of Regency.

“These major national issues require all of you – the ruling parties as well as the opposition, the Government as well as Parliament – to make the spirit of constructive consensus prevail and to avoid political bickering,” he said.

Stressing the importance of the organic law on the adoption of the Amazigh language that will give this language an official status and enable it to play its intended role, King Mohammed VI insisted that “it should be kept in mind that Arabic and the Amazigh language have always fostered unity. They will never be the cause of dissension and division.”

The King also dwelt on the projected organic law on the right to strike, pointing out that the law “requires broad-based consultations as well as the commitment to a spirit of constructive consensus, in order to uphold workers’ rights as well as the interests of employers and those of the nation.”

King Mohammed VI on the other hand urged the MPs to speed up the adoption of the draft texts already tabled before the parliament and also to implement the texts adopted.