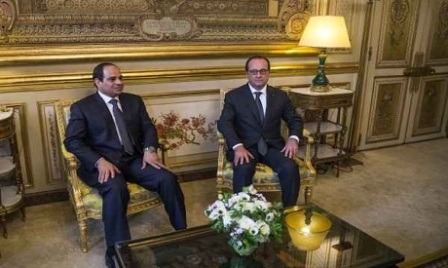 Cairo and Paris are expected to ink mega military and economic deals on Saturday during the two-day visit French Prime Minister, Manuel Valls, is paying this weekend to Egypt at the head of a high level ministerial delegation.

The French embassy in Cairo confirmed that Manuel Valls s’ delegation to include Defense Minister Jean-Yves Le Drian will ink a batch of military and economic deals with Cairo.

Valls will also inaugurate the new Lycee Francais in Heliopolis.

France and Egypt have started negotiations on the purchase by Egypt of a number of France-made NH90 medium helicopters. Late last September, Paris announced that Egypt would buy two Mistral warships estimated at $1 billion and back in February Egypt accepted to purchase 24 Rafale fighter jets from France.

Paris and Cairo have stepped up their bilateral cooperation, mainly their military cooperation since al-Sissi’s rise to power.

The Saturday visit will unveil other major deals, such as the purchase by Egypt of four naval corvettes from France for $1.1 billion. Delivery is scheduled for 2019. France is also said to be building the first Gowind corvette destined to Egypt in the modern naval shipyard of Lorient.