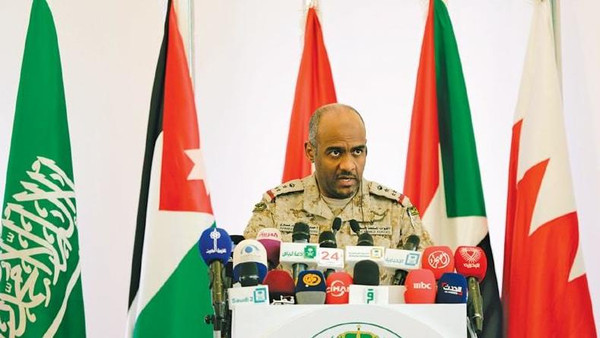 The spokesman for the Saudi-led military coalition, Brig. Gen Ahmed Asiri, has stressed that fighting is still going on and there are no plans to halt operations because they are yet to receive official information from the Houthi Movement and their allies.

His statement comes a day after the U.N reported that it received a letter from the Houthis declaring their will to abide by the U.N’s Security Council resolution 2216 as well as the Muscat Principles agreed upon with the world body during talks in Oman last month.

Asiri stressed that the coalition forces will continue to pursue the goals of the resolution and if there is to be any valid ceasefire agreement or change of plans by the coalition, “it will be formally announced by the Yemeni government and the United Nations.”

Special Envoy for Yemen, Ismail Ould Cheikh Ahmed, will be heading to the country to promote a political solution.

The coalition spokesman did not dwell on whether a pledge for a ceasefire from the Houthis will be accepted.

Resolution 2216 calls for the Houthis to withdraw from territories under their control and refrain from violence or provocative actions.

Allegations of a coalition airstrike killing around 13 people and wounding 38 at a wedding were also denied by Asiri as he maintained that they “did not conduct any operation in Bhamar” where the incident took place.

Meanwhile, a solidarity march with the Hadi government and the coalition forces, that were targeted by the Islamic State group recently, was staged in Aden on Thursday.