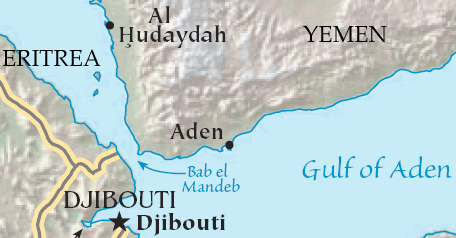 The Houthi Movement and their allies clashed with pro-Hadi forces backed by the Saudi coalition over the control of the strategic Bab Al Mandab Strait with the rebel group considering the attack as a “blatant escalation” of the war. The Strait is an important passage for global trade.

Airstrikes and warships supported the pro-Hadi troops on the ground.

A spokesman for the media office of Houthi leader Abdel-Malek Al Houthi posted on Facebook that the coalition forces attack to dislodge them from the strait “aims to arouse the international community’s concern over the safety of the shipping lane.”

Intense violence around Bab Al Mandab could affect the movement of ships from the Gulf, Europe and Asia and probably lead to a hike in oil prices. Data from the US Energy Information Administration claimed that more than 3.4 million barrels of oil per day passed through the 20km wide strait in 2013.

At the beginning of the Saudi-led coalition’s campaign, Riyadh and Cairo sent warships off the coast of Yemen to secure the Strait. Egypt is concerned about the safety of the strait because it is a gateway to the Red Sea and Suez Canal.

It is still unclear if the pro-Hadi forces were able to force the Houthis out of the area that they have been controlling for several months. The western shore of Bab Al Mandab is controlled by Djibouti and Eritrea.