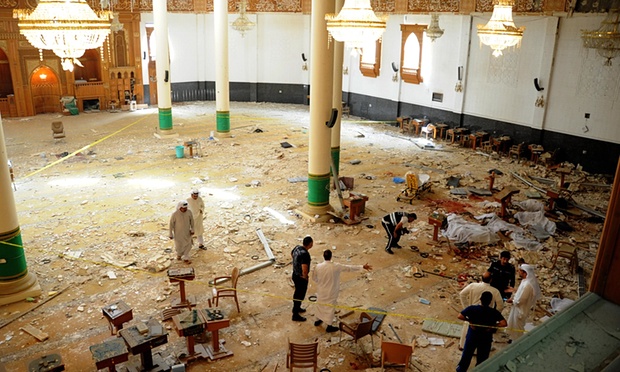 Judge Mohammad al-Duaij read out his ruling of the 26 June suicide attack at the Imam Sadiq mosque in a packed Kuwaiti courtroom with armored vehicles deployed around its perimeter and helicopters hovering above it.

Seven suspects were handed the death sentence, eight were given jail terms ranging from two to fifteen years and 14 others were acquitted. Some of the accused were sentenced in absentia.

The June attack was claimed by an affiliate of the Islamic State known as the Najd Province that has also carried out attacks in Saudi Arabia.

Seven Kuwaitis, five Saudis, three Pakistanis, 13 of Kuwait’s stateless Bidun group and an unidentified fugitive were on trial for their alleged roles in the attack. Five of the seven sentenced to death were tried in absentia. Executions are a rare feat in Kuwait but Amnesty International stated that five convicted criminals were hanged in 2013.

At least 26 people were killed while more than 220 injured in the suicide attack on the Shia mosque carried out by Saudi citizen Fahd Suleiman Abdulmohsen al-Qaba’a. IS regards Shia Muslims as heretics.

Kuwait has been able to avoid the tension between the Sunnis and Shias in the Middle East but has been engaged in diplomatic clashes with Iran that it accuses of trying to sow discord within the region and supporting terrorism. The country’s last major attack dates back to 1983 when Iranian-backed Shiite militants from Iraq carried out bombings that killed at least five people and targeted Western embassies according to the Kuwaittimes website.