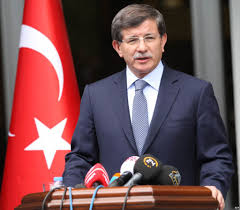 Prime Minister Ahmet Davutoglu presented Turkey’s position regarding the ongoing chaos in the Middle East amid speculations that it would intervene in Syria, making it clear that Ankara will not take any decisions likely to “put the country at risk” but that “all measures are ready” if Turkey’s security is threatened.

Turkey has often been criticized for its limited role in the Syrian and Iraqi war but the Prime Minister has stressed that his government’s position will not be determined by external factors but by national interest and security.

Davutoglu said in a live broadcast on Turkish Kanal 7 television that “no one should have an expectation that Turkey would enter Syria tomorrow or in a short period” as he highlighted that “we will never take a step that would put the country at risk and allow the formation of [threatening] structures on our borders.”

He said Ankara is not interested in taking decisions which could “put the country at risk” although they don’t want to see “neither terrorist group nor [Syrian] regime atrocities.”

The prime minister, trying to send a deterrent message, claimed that “all measures are ready” to be enacted if Turkey’s security is threatened but downplayed the possibility of the country making a solo intervention.

Davutoglu said Turkey is aware of the cooperation between the warring parties as he alleged that the Islamic state and Damascus are cooperating in fighting against the Kurdistan Workers’ Party (PKK) and the pro-Kurdish Syrian Democratic Union Party (PYD) which enjoy the support of the U.S-led coalition. He showed concerns about the “threatening” ties between PKK and PYD and warned that “Turkey will not remain indifferent to relations between the PKK and PYD if they become threatening to the country.” Ankara classifies PYD as a terror organization.