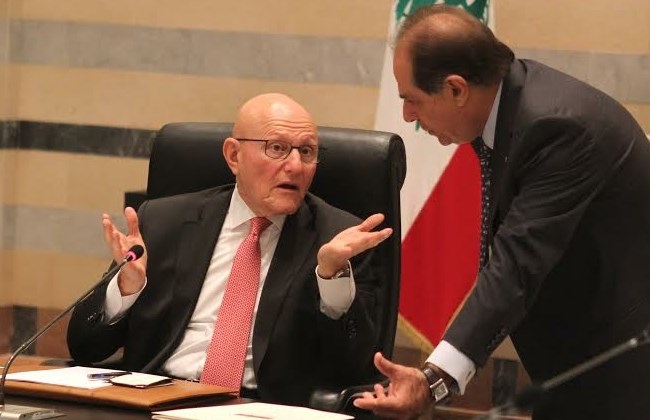 The Lebanese cabinet held a meeting on Thursday after almost a month of suspension, but again the meeting ended in a dispute over the agenda.

One of the major stumbling blocks is the insistence of the Free Patriotic Movement (FPM) to have on top of the cabinet agenda discussions on the article concerning the appointment of high-ranking security and military officials.

The cabinet started debating a plan proposed by Agriculture Minister Akram Chehayeb providing for a $21 million subsidy to support agricultural products exports through giving cash and logistical assistance to farmers and truck owners exporting to the Gulf by sea. But the FPM’s two ministers opposed discussions on the proposed plan and reportedly vowed to continue interrupting the session unless the appointment of security and military officials is put on top of the agenda.

The Cabinet finally managed to pass the proposal on assistance to agricultural goods exports, but debates hinged on the decision-making system in the Cabinet and the authority given to ministers who are assuming the prerogatives of the president.

“In the absence of a president there is no clear decision-making mechanism and there is no clear outline for the authority of each minister,” said Education Minister Elias Bou Saab of FPM. This has contributed to the disagreements in cabinet sessions, he said.

Usually, the agenda items are set by the president, but as there is no president, it’s the Prime Minister who is now authorized to determine the topics to be discussed. However, his choice is not always approved by all the cabinet ministers as it happened during the Thursday meeting.

Prime Minister Tammam Salam adjourned the session due to the heated debate that followed. His office said in a statement that the cabinet will continue to prioritize consensus as to decision taking mechanism as long as it “doesn’t lead to unproductive disruption.”

The Education Minister’s FPM is blamed for the last adjournment of the session which lasted for three weeks but Saab said those behind the disruption of the cabinet functions are the forces responsible for “disrupting national partnership” as he acknowledged that the Prime Minister “is seeking national interest and the interest of the Lebanese people but the disruption isn’t here.”

Hezbollah, Tashnag Party and the Marada movement are allies of the FPM in the cabinet and they account for six of the 24 ministers.