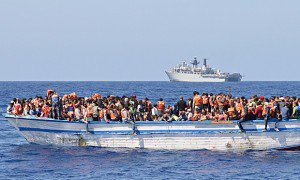 Libyan authorities have refused to collaborate with the European Union in its military operation against illegal migrant smuggler networks operating on the coasts of Libya as Air Force commander Saqr Geroushi warned EU on Tuesday that EU vessels could be targeted if they enter Libyan waters without clearance.

“Any vessel found in Libyan waters without previous cooperation or permission will be targeted by the air force,” Geroushi said.

The first phase of the EU military action “EUNAVFOR Med” against migrant smuggler networks was kicked off yesterday. The first phase which consists in gathering information on the smugglers and the networks is part of a four level operation that EU leaders approved few months ago as a solution to curb the number of illegal migrants crashing at the coast of Europe mainly in Italy and Malta.

The Sicily-headquartered operation will also use satellites to gather communications and images as well as 15 submarines, warships, drones and helicopters. Some EU countries namely UK, France have promised to offer logistics including helicopters for the success of the operation.

The Tripoli-based government also expressed concern at the EU’s plans, signed off yesterday at a meeting of EU foreign ministers. It said that anti-smuggler operations within Libyan waters required its permission.

The waves of illegal migrants trying the perilous Mediterranean crossings have not lost momentum. 2,500 migrants are reported to have been landed in Sicily lately. Other 1,000 migrants have been rescued by Norwegian and Danish warships.

Libya has become jump-off point for many illegal migrants who are smuggled by criminals and unlawful networks that have taken advantage of the lawlessness in Libya. Since the fall of Muammar Gaddafi in 2011, Libya has been ruled by two different governments and parliaments supported by uncontrolled militias.