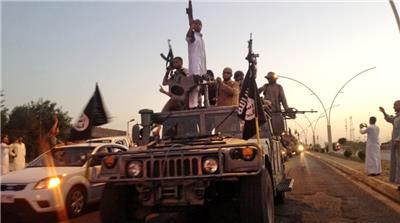 The Savage killing group ISIL on Tuesday called on Muslims around the world to practice more killing of infidels during this holy month of Ramadan so as to become martyrs and get closer to God.

The call was launched by the spokesperson of the group, Abu Mohammed al-Adnani, in a video recording posted online in which he announced an amnesty for people who fought against IS in Iraq’s Anbar province, and called on residents who had fled violence there to return home.

The group which made important gains in recent months is now facing strong resistance from the Iraqi forces and tribesmen fighting on the side of the government forces.

Iraqi forces have made major gains in Diyala and Salaheddin provinces north of Baghdad.

The takeover of the Ramadi, Anbar province by the ISIL has caused huge flows of refugees. UN agencies say that around 300, 000 people fled the Ramadi area between April and mid-June.

Adani also gave a last chance for people, fighters, soldiers, tribesmen of Jughaifa to repent and surrender otherwise they would be run over and killed, he claimed.

Analysts say people will not buy into the offer as they are reminiscent of killings and executions acts of ISIL.