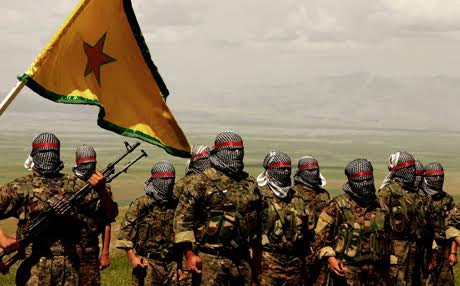 Kurds fighting under the banner of the Popular Protection Units (YPG) claimed that they are about 50 kilomteres away from the Islamic State’s de facto capital Raqqa after recovering Ain Issa and its surrounding villages on Tuesday.

The loss of Ain Issa could force the militants of the extremist group to withdraw to the outskirts of Raqqa because there are no strong defense lines beyond.

YPG spokesman Redur Xelil said that Ain Issa is under their “total control.” According to the Syrian Observatory for Human Rights, a UK-based monitoring group, the Kurdish fighters were supported by the US-led military campaign with airstrikes.

Director Rami Abdul Rahman said the progress of the Kurds in the area could continue because “the Islamic State’s defensive lines have now been pushed back to the outskirts of Raqqa city because the area between Raqqa and Ain Issa is militarily weak and they have no fortifications.”

The Islamic State has headquarters at Raqqa and YPG has been getting closer to it following continuous victories since they took over Kobane at the beginning of the year. The latest victory has allowed them to link the pockets of territories they control along the Turkish border, from Iraq in the east to Kobane in the west.

The war in Syria between different parties with different motivations have been marred with “unspeakable suffering” as civilians are deliberately targeted and the Assad regime was scolded for inflicting “the most damage” with “its superior firepower and control of the skies.”

Paul Pinheiro, head of the UN Human Rights Council’s independent commission of inquiry on Syria, deplored the “devastating effect”  of the war on the civilians who continue to be “the main victims of an ever-accelerating cycle of violence.”