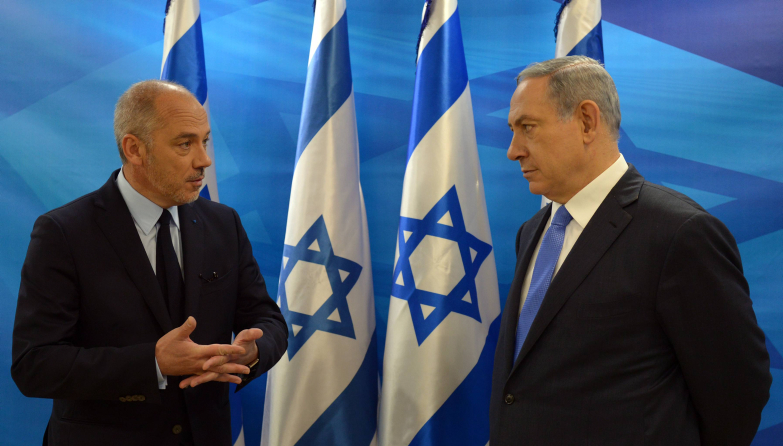 Stephane Richard, CEO of Orange, visited Israel to meet Netanyahu and former president Shimon Peres after his comments about his desire to leave Israel were criticized.

Activists have been calling for the boycott of Israel and Richard stated in Cairo that there are plans to “withdraw the Orange brand from Israel” as soon as “tomorrow morning… but without exposing Orange to huge risk.”

The brand is being used by Israeli mobile provider Partner and last year, an extension of the contract for a decade was signed.

Netanyahu told the Orange CEO that his comments “were widely seen as an attack on Israel” and added that his visit “is an opportunity to set the record straight.” Netanyahu tried to discredit the activists campaigning for Israel’s boycott saying that “Israel is the one country in the Middle East that guarantees full civic rights… where everyone is protected under the law equally” before adding that “boycotts and threats of boycotts” won’t solve the Israeli-Palestinian conflict.

CEO Richard said he came to Israel “as a friend, not as an enemy” and to also “clear up the confusion that was created after those statements.” He added that he regrets the “controversy” caused by his earlier statement and gave assurances that Orange will honor its contract with Partner although he didn’t meet with Partner executives. Richard said they will keep on “doing business” and will never participate in boycotts against Israel; describing the Jewish state as “a fantastic place to be in the digital industry and of course our [desire] is to strengthen and to keep on investing here.”

However, Richard preferred to coy on the future during a TV interview with Israel’s Channel 2 saying “I don’t know. We will see” if the brand will go out of Israel.