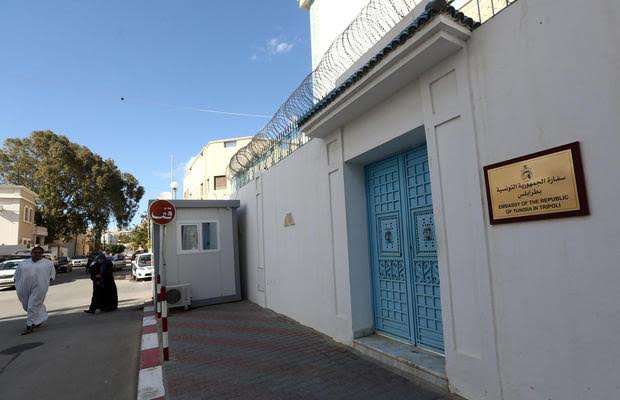 During a joint press conference at the Edhiafa Palace with the head of the Moroccan government at the end of the Tunisian-Moroccan high joint committee meeting, Prime Minister Habib Essid stated that the government is closely monitoring the developments surrounding the kidnapping of 10 employees of the Tunisian consulate in Libya when it was attacked by unidentified armed men.

Tunisia is one of the few countries that still have its diplomatic mission operating in Libya. Essid said “specific information will be provided later on.”

The foreign affairs ministry described the attack on the consulate and abduction of the staff as a “cowardly attack on Tunisian national sovereignty” and a “flagrant violation of international law and diplomatic conventions.” It has also advised its citizens against travelling to Libya unless in emergency cases and urged those there to be vigilant and leave the country if necessary.

Prime Minister said “it is important to find a solution (to the Libyan crisis) as soon as possible since stability and security in this country are essential for Tunisia and all the Maghreb countries.” This is the second time in just a few weeks that Tunisians have been held hostage by Libyan militiamen.

The government has not accused any group of being behind the attack nor has there been a claim by any but reports monitored on the Tunisian news media claimed that Libya Dawn was behind the attack in retaliation to the arrest and detention of Walid Qulaib, one of the group’s leaders, by Tunisian authorities upon his arrival at the Tunis airport on May 14. There have been claims that he is charged of “running militant training camps and bases in Libya that were behind the kidnapping of civilians, among them Tunisians.”