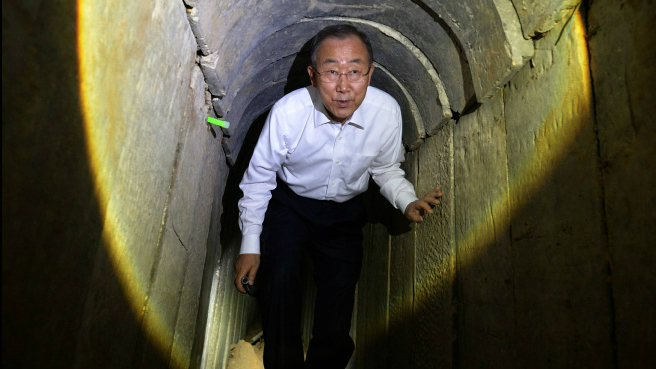 U.N Secretary General Ban Ki-moon has decided to forgo the recommendations of the Special Representative of the Secretary-General for Children and Armed Conflict, Leila Zerrougui, to include Israel and the Palestinian Gaza-based Hamas organization in the UN blacklist of States and groups that violate children’s rights during conflicts.

In a report he submitted on Monday to the UN Security Council, the Secretary General discarded Mrs Zerrougui’s recommendations in what was described as a very unusual move.

In the draft of the report, the Special Representative had mentioned the Israeli Defense Forces and Hamas as “systemic violators of children’s rights” but the final decision on the blacklist members was Ban’s.

According to the Israeli media, the UN Secretary General erased Israel from the list at the pressures of Israel and the U.S.A.

The move was welcomed by the Israeli ambassador to the UN Ron Prosor who hailed Ban for his decision stating that it was “right not to submit to the dictates of the terrorist organizations and the Arab states, in his decision not to include Israel in this shameful list, together with organizations like the IS group, al Qaeda and the Taliban.”

The U.N was under pressure to include Israel in the U.N blacklist after the 2014 summer war with Hamas left at least 540childen dead and many more traumatized. A UN inquiry after the war found that Israel fired on seven UN schools.

The Jewish state didn’t however escape the criticisms of Ban Ki-moon who noted in the report that “the unprecedented and unacceptable scale of the impact on children in 2014 raises grave concerns about Israel’s compliance with international humanitarian law … particularly in relation to excessive use of force.” He also stressed the need for Israel to take “concrete and immediate steps, including by reviewing existing policies and practices, to protect children, to prevent the killing and maiming of children, and to respect the special protections afforded to schools and hospitals.”