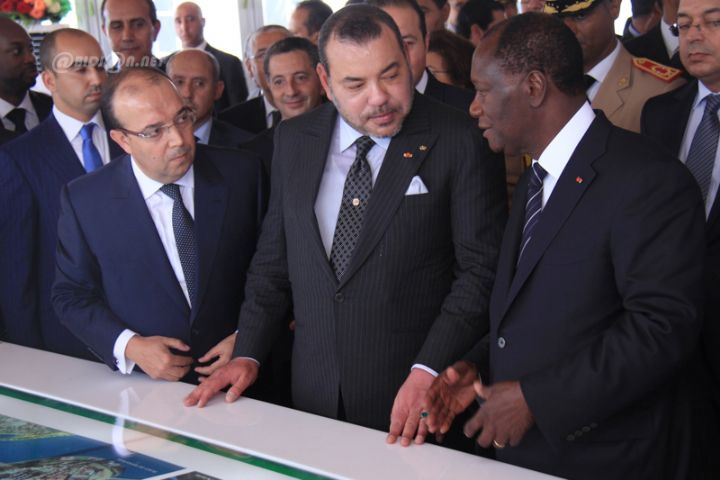 Côte d’Ivoire and Morocco have renewed their shared commitment to upgrade their bilateral cooperation and to expand this cooperation to the entire northwest African region, being both convinced that Africa must help Africa.

“True to their belief that Africa must help Africa, the two countries’ leaders, King Mohammed VI and President Alassane Ouattara, underscored the need to work together to expand and extend their cooperation to the entire northwest Africa region on the one hand, and to fight new forms of criminality, including terrorism, cyber-crimes, maritime piracy, and drug trafficking, on the other, and called on the international community to intensify efforts to curb these scourges.”

This came in the joint communiqué made public on Friday at the end of the friendship and working visit King Mohammed VI paid to Côte d’Ivoire and that was marked by intensive talks between the two leaders, by the launch of several development projects involving Morocco and by the signing of a number of cooperation agreements.

The Moroccan Sovereign and President Ouattara have thus reaffirmed their commitment to the establishment of the Northwest African Space, a project that they had agreed upon during the Ivoirian President’s latest official visit to Morocco, in January 2015.

For the two leaders, the Northwest Africa Space provides significant opportunities for cooperation between the countries of the region “in strategic areas such as environment, food security, health, energy, infrastructure, including interconnection logistics, resources pooling, experiences sharing and can, in this respect, be a zone of co-emergence and stability,” states the joint communiqué.

The two leaders argue that “such a framework could constitute a platform for political consultation and security coordination and a basis for a regional integration that would be beneficial for all the countries in the region.”

These countries are linked by a common history, shared values, a similarity of the development challenges and multifaceted threats they face and can therefore stand out as an integrated pole of development and prosperity.

In this context, President Ouattara voiced his active support for the conclusion, the soonest possible, of an economic partnership agreement between Morocco and ECOWAS.

Regarding the conflicts in Africa, the two heads of State called for inclusive and sustainable political solutions to the crises facing the continent and particularly the West African region.

In this regard, President Ouattara praised Morocco’s efforts to find a definitive settlement to the regional dispute over the Moroccan Sahara and reiterated his country’s “strong support to the Morocco-proposed initiative to grant broad autonomy to the Sahara region in the framework of the kingdom’s sovereignty, unity and territorial integrity.”

Over the past three years, the two countries have consolidated their partnership noticeably, concluding nearly fifty cooperation and investment agreements in the fields of banking, agribusiness, real estate, industry, infrastructure, ICT, tourism and transportation, and implementing a dozen development projects.

This successful strategic partnership stands out as an innovative model of South-South cooperation and translates Morocco’s unwavering commitment to expand economic opportunity in the whole region.