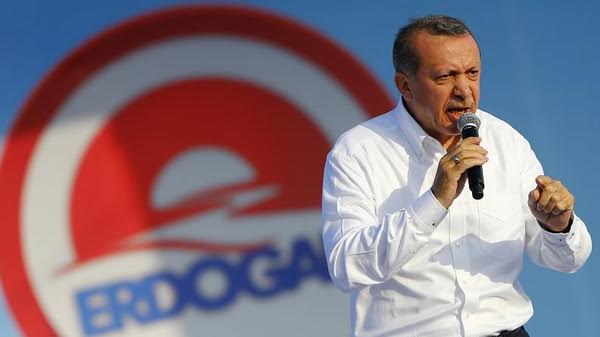 President Erdoğan has attacked opposition parties ahead of the parliamentary elections on Sunday in a bid to lure votes for the ruling Justice and Development Party (AKP).

He alleged that the Peoples’ Democratic Party (HDP) “is controlled from the mountain;” making reference to the Kurdistan Workers’ Party (PKK) that has its headquarters in the Kandil Mountains of northern Iraq. He claimed that HDP is conniving with another opposition party, Republican People’s Party (CHP), to get more seats in the parliament.

Erdoğan accused Kemal Kılıçdaroğlu, leader of the main opposition party Republican People’s Party (CHP), of being a liar after the latter claimed that the president was using a gold-plated toilet seat.

Erdoğan recently took Kılıçdaroğlu to court for claiming that his gargantuan palace had gold-plated toilet seats, arguing that by such “slander and lies,” the opposition leader had crossed the limits of freedom of expression.

Kılıçdaroğlu has often accused the president and his party of living an extravagant lifestyle and of corruption. He was quoted as saying that “the authorities are taking, in the cruelest way, billions from Turkish taxpayers and spending them on Mercedes, jets and presidential palaces.” The opposition leader brought up in this respect the $615 million spent on building the gargantuan presidential palace in Ankara as well as the acquisition of a new presidential jet worth $185 million.

The opposition leader also mocked the president for campaigning for the Prime Minister and urged him to “take up again the leadership of the AKP and lead the campaign.”

Erdoğan, as the country’s Head of State must demonstrate neutrality, but he has been holding meetings dubbed “meeting with the people” although his critics say such meetings are serving as an AKP campaign platform for the parliamentary elections.