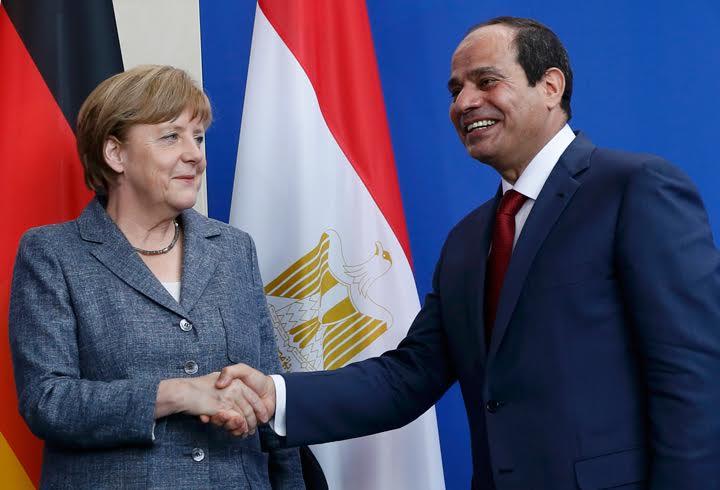 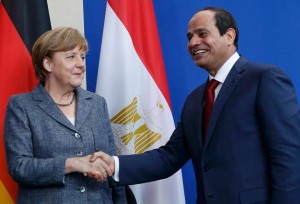 President Sisi arrived in Germany on Wednesday for a two-day working visit and was welcomed by German Chancellor Angela Merkel. The visit is expected to be marked with the signing of agreements at the end of a business conference on Thursday.

Merkel said “Egypt is one of the central countries in a region marked by unrest and instability” and opined that establishing close business ties with Germany would help to reinforce its “stability through economic development.” The German chancellor also showed concerns about justice in Egypt as she stressed that “under no circumstances, even with regard to terrorist activities, must people be sentenced to death.”

Sisi replied that the Egypt’s justice system is independent and fair and most of those who are on death row including former president Morsi can still request for a judicial review. The ousting of Morsi in a coup d’état led by Sisi and backed by military was followed by wide spread demonstrations. The president stressed that Egypt cannot be left to take the path of chaos like in Syria, Yemen, Libya and Iraq as he explained that even though “we too love democracy and freedom,” “we cannot allow this” to happen.

Sisi has met with President Joachim Gauck and is expected to hold talks with Vice Chancellor Sigmar Gabriel and Foreign Minister Frank-Walter Steinmeier.

The economic highlight of the visit for the moment is the signing of a €8billion deal with Siemens for natural gas and wind power plants.