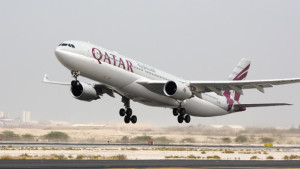 It seems as if Qatari authorities take into consideration countries that satisfy the interests of Qatar Airways when they offer projects to foreign companies.

The insinuation was made by Qatar Airways CEO, Akbar al-Baker, during a ceremony that marked the addition of a new slot to the carrier allowing it to fly seven days a week to and from Amsterdam Schiphol.

Baker told authorities in Amsterdam that their move will not go unnoticed because “if you do not allow us to benefit in a small way by bringing flights, you should not expect commercial contracts from the government.” He added that “my government will definitely not be happy” if you maintained your stance; making reference to the Dutch government announcement at the beginning of the month that it would temporarily stop granting new landing slots at Schiphol to Gulf airlines because of their “unfair competition.”

It is still unclear what led to the U-turn in Amsterdam although Al-Baker mentioned that Qatar has “some $150 billion in infrastructure projects coming up in the next years” after pointing out that “Shell is one of the biggest single investors in the country.”

The Hague-based Royal Dutch Shell plc is the parent company of Shell group. He claimed that he doesn’t have any direct influence over public procurement decisions, but made it clear that Qatar has lucrative projects to offer in the build-up to the 2022 FIFA World Cup.

Western airlines have often lamented that Gulf airlines are very close to their governments thereby offering them an advantage over their competitors coupled with subsidies. Al-Baker said Qatar Airways is “still a young airline” compared to European flag carriers that have enjoyed government equity holdings for most of their existence.