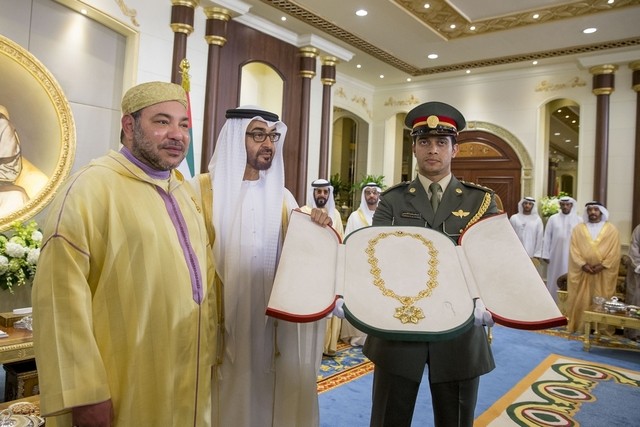 King Mohammed VI of Morocco has been honored with the United Arab Emirates’ Order of Zayed in recognition of his efforts to cement and promote the historical links between the two countries.

The Moroccan King who was on a working and friendship visit to the Gulf country held talks with Sheikh Mohammed on means to further strengthen bilateral relations and on a set of regional and international issues of common interest.

Talks also covered means of boosting the strategic cooperation and partnership existing between the two countries.

The two sides expressed satisfaction at their deep-rooted ties that are based on cooperation, solidarity, collaboration and mutual respect.

A special focus was laid on the armed conflicts marring the region and the threats posed by terrorist organizations, as seen in Iraq,  Syria and Yemen.

The Abu Dhabi Crown Prince said the ties between the two countries are marked by “a longstanding cooperation and fraternal relationship” enhanced by the brotherhood, love and mutual interest that have been shared since the reign of the late King Hassan II of Morocco and the late Sheikh Zayed, founder of the UAE.

Sheikh Mohammed said the two countries’ balanced policies enabled them to secure their stability and prosperity.

He hoped that the two countries’ policies could serve as a model to the Arab world that is aspiring to occupy an “an ambitious international position” in global affairs.