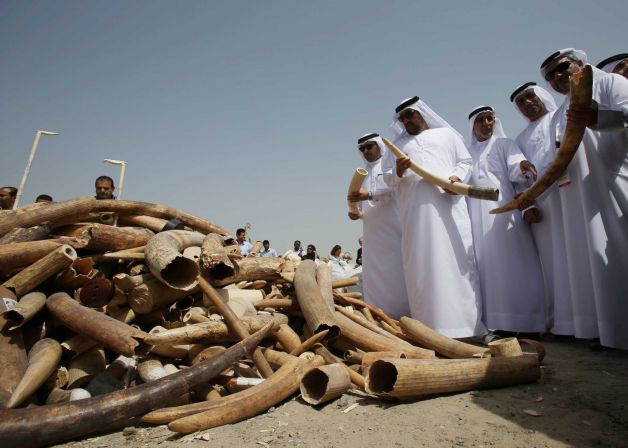 The United Arab Emirates has crushed more than 10 tonnes of elephant tusks and ivory carvings confiscated in the Gulf country in a move destined to send a strong message to poachers and smugglers.

The UAE is not a major destination for smuggled ivory, but it is at the crossroads for the trade because of extensive air and sea links to Africa, Asia, Europe and the Mideast. The commercial hub of Dubai is home to the Middle East’s largest seaport and busiest airport.

According to some experts, the illegal wildlife trade generates an estimated US $19-billion a year, ranking fourth on the list of the most lucrative illegal activities in the world behind drugs, counterfeiting and human trafficking.

The price of one kilogram of ivory is $ 2,100 on the wholesale market in China, while retail prices are much higher.

Wildlife militants say that 25,000 to 50,000 elephants are killed for their tusks each year. Most of it is destined for China and other Asian markets.

The African elephant is threatened, with less than 400,000 remaining worldwide. And as poachers continue killing them for their “white gold” (tusks) at an alarming rate (one African elephant is killed every 15 minutes), there will be no elephants left in the wild in the next decade. So it is worthy to fight greedy poachers and traffickers.