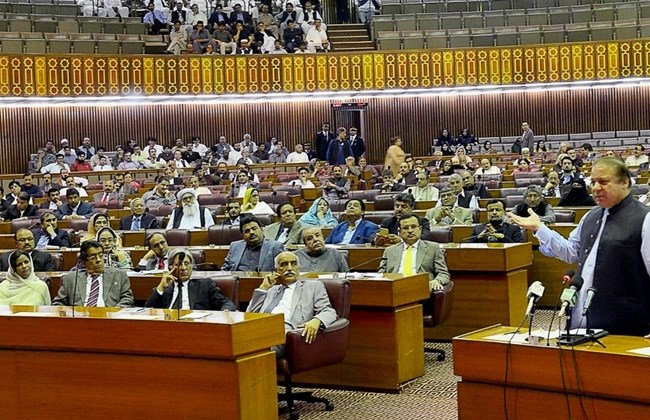 Pakistani MPs have voted a resolution insisting that their country “should maintain its neutrality in Yemeni conflict” and avoid being dragged in overseas armed conflict.

After a week long debate, the MPs agreed that Islamabad should play a mediating role between Yemen’s warring factions, dealing a hard blow to the government which expressed readiness to participate in the Saudi-led military campaign launched against the Shia Houthi rebels, supported by Iran.

Pakistan was expected to provide warships, aircraft and even ground troops. According to some analysts, Pakistan cannot afford getting involved in Yemen as the country is already busy with major operations against its own Islamist rebels, including the Pakistani Taliban.

Pakistani politicians feared involvement in Yemen could exacerbate sectarian tensions inside the country. They also wanted to maintain good relations with its gas-rich neighbour Iran, which it hopes will help alleviate energy shortages once the international sanctions are lifted.

The vote of Pakistan’s parliament also comes after the visit paid to Islamabad by the Iranian foreign minister Mohammad Javad Zarif who urged the country’s officials and military not to intervene in the Yemeni conflict.

Saudi Arabia, supported by several Arab and foreign, has launched airstrikes to stop the advance of the Houthi rebels who ousted the elected government, plunging the country into chaos and widespread instability.

The Saudis said they acted upon the request made by the legitimate Yemen government.