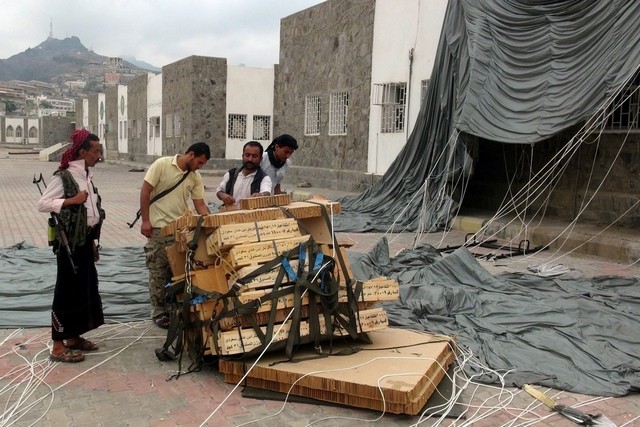 Saudi Arabia has started arming President Hadi loyalists fighting against the Houthi movement with light weapons, telecommunications equipment, rocket-propelled grenades and medical aide dropped from crates according to the Aden al-Ghad, a pro-Hadi newspaper. The supply of arms and the launching of military airstrikes on Houthi positions helped to turn the wave in Aden as Houthis were forced to flee on Friday after taking over the city on Thursday.

The Saudi-led Arab coalition wants to bring President Hadi back to power and reinstate him as the legitimate head of state of the country. Hadi was aided by Saudi Arabia to leave the country after he escaped a Houthi house arrest in Sana’a before resurfacing in Aden. The city is currently his last symbolic foothold in the country and losing it could jeopardize a possible return to power.

However, the Houthis could prove to be a hard nut to crack and it seems as if Saudi Arabia and its allies are preparing to launch a ground attack but official statements regarding such operations are still blurry. Saudi ambassador to Washington Adel al-Jubeir said on Thursday that the kingdom does not have “formal” troops on the ground in Aden while military officials maintain that sending in ground troops remains an option but not an automatic move.

On Friday, tribal sources said that Riyadh started to tear down parts of a fence along its border with the northwestern Yemeni provinces of Saada and Hajja. Explanations regarding the move are yet to be given but the action clearly hints that the deployment of troops could soon become an option since Riyadh and its allies have enough troops along the border to launch a full-scale invasion