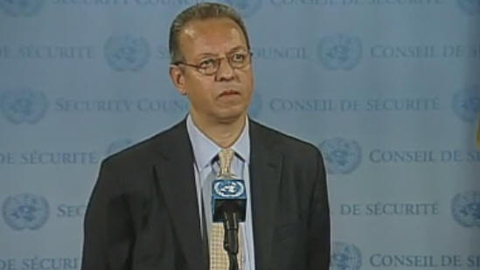 UN Security Council has been informed by Jamal Benomar special envoy to Yemen that neither the Houthi Movement nor government forces can take over the entire country. He explained the need for a “peaceful dialogue” in order to avoid a “protracted conflict in the vein of an Iraq-Libya-Syria combined scenario.” The Houthis have taken over the strategic city of Taiz, third most important city in the country, and have setup checkpoints.

The Security Council was in an emergency session to evaluate the crisis in the country as it gets closer to a civil war and fears that the Islamic State could capitalize on the chaos to strongly implant itself in Yemen. Special envoy Benomar discouraged supporting any party in the conflict because according to him, “it would be an illusion to think that the Houthis could mount an offensive and succeed in taking control of the entire country” as “it would be equally false to think that President Hadi could assemble sufficient forces to liberate the country from the Houthis.”

Houthi leader, Abdel Malik al Houthi, confirmed the fears of the special envoy of the Houthi controlled Al Masirah channel saying that “what is happening in Iraq and Syria should be examples for Yemen. And sadly, we are starting to face what those countries faced.”

Benomar warned that “emotions are running extremely high” and sectarianism is increasing in the country as well as north-south divisions. UN-brokered negotiations are also being undermined by “extremists on many sides.”

Al-Qaeda in the Arabian Peninsula also forced US troops at the airbase of al-Annad to evacuate after they seized a nearby city. The airbase is used to launch drones.