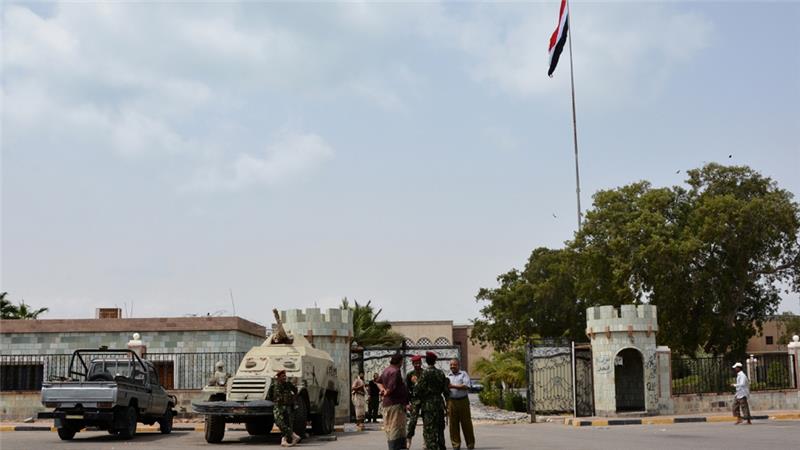 Yemen’s presidential palace in Aden was targeted by a warplane shortly after clashes broke out between men led by renegade General Abdel Hafez Al Saqqaf and a local paramilitary group that backs President Hadi. The warplane missed the palace and a second attempt was repelled by anti-aircraft guns. The president has left for a safe place within the country and a presidential statement said the attack was a coup d’état attempt.

Tension broke out between the President’s allies and General Saqqaf as the latter refuses to heed to a decree sacking him and he only executes orders from the pro-Houthi established presidential council in Sana’a. Forces loyal to Hadi backed by tanks and armored vehicles attacked his military base near the Aden military airport forcing all flights to be cancelled. Security sources claimed that at least 10 people were killed.

On the same day, an unidentified warplane attacked the presidential palace in Aden housing President Hadi after he escaped from a house arrest in Houthi controlled Sana’a. A presidential statement released after the attack said “the failure of the military coup… was backed by the former regime, which was one of the perpetrators of extermination.” It added that the coup attempt was a manifestation of rejecting any solution or dialogue to end the crises.

Aden governor Abdulaziz bin Habtoor said the city continues to be “peaceful and things are back to normal after the rebellion was ended.” He accused the Houthis of being behind the attack.

The airstrike could mean that the crises are taking a new dimension as hopes for talks still continue to be stalled by differences. Hadi continues to be the President but Prime Minister Bahah released a few days ago wants dialogue to begin.