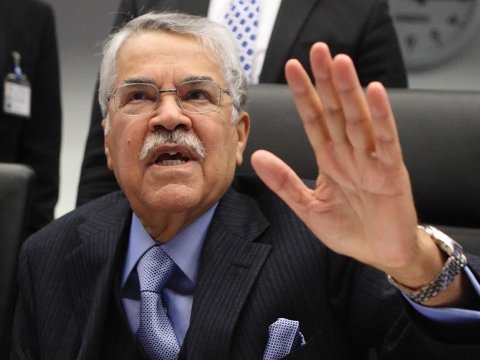 Saudi Arabia’s oil minister Ali al-Naimi rejected claims that Riyadh is behind the drastic fall of oil prices as he stressed that it is the responsibility of all oil producing countries. OPEC decided not to cut production in November and Saudi Arabia was adamant on the point during the meeting but Naimi said OPEC only produces 30% of the global market production and can’t therefore be able to remedy the situation alone.

Between June 2014 and July 2015, oil prices have fallen by 60% and some countries dependent on oil revenues have been obliged to embark on drastic budget cuts or suspend development projects.

Naimi said oil prices could increase if OPEC members and non-members decide to cooperate. Countries have to reduce production in order to boost prices but OPEC is unwilling to adopt such a decision alone because it will lose its market share.

“All must contribute if we want to improve prices because it is in the interest of all,” the minister said. He revealed that talks were held with other non-OPEC major oil producing countries before the OPEC meeting in November but they failed to reach an agreement because “they (non-members) insisted that OPEC should take the responsibility alone.” Naimi said “the situation is difficult” but there is hope that possible talks could lead to an agreement ahead of OPEC’s next meeting.

According to the Saudi Minister, several countries had been invited to join the organization but they declined the invitation. He stressed that the organization is “not against anyone” but “with all to support stability in the market and to support a balance between supply and demand” and will not take responsibility alone “because (OPEC) produces 30% of market output and 70% comes from outside.”