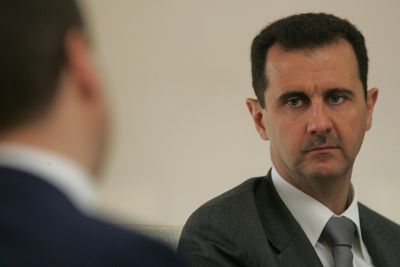 U.S. Secretary of State John Kerry said that they together with their allies are putting pressure on Assad to get him to the negotiation table as he admits that “we have to negotiate in the end.” He said “various kinds” of pressure are needed to get him to the negotiation table “in the context of the Geneva I process.” These statements uttered during an interview on CBS television seem to show signs of flexibility on Washington’s position with regards to government in Damascus because it has stressed in the past that President Assad must leave.

The Geneva I process in 2012 was aimed at facilitating a transitional government to end the conflict but it failed and this year a Russian initiative to revive talks between the warring parties also failed after it was boycotted by the main opposition coalition.

US has always long insisted that Assad must be replaced through a negotiated, political transition, although the rise of a common enemy, hardline militant group Islamic State, appears to have slightly softened the West’s stance toward him. Kerry said the US and its allies “have to make to make it clear to him (Assad) that there is a determination by everybody to seek that political outcome and change his calculation about negotiating.”

However, State Department spokeswoman Marie Harf said Kerry’s statements during the interview does not mean that negotiations will be with Assad but rather “representatives of the Assad regime” as she stressed that “it has never been and would not be Assad who would negotiate.”

It is five years now since the war started in Syria and neither the government nor the rebels has been able to win it as the country remains divided between the different warring parties.